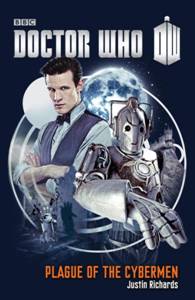 If you’ve read my review of The Dalek Generation, you probably already realize that when it comes to reviewing a book, I pay attention to weird things. I don’t apologize for that, at least not typically, because after all, there are hundreds of reviews of various books, and I want to make things interesting.

It seems, though, like I’m apologizing here, and I guess I am, because despite the fact (spoiler) that I like this book, I’m about to be a bit of a dick. As The Doctor might say, can’t be helped.

Before I get to the book proper, then, I wanted to observe something. In reading BBC Doctor Who: The Plague of the Cybermen, by Justin Richards, I noticed that it really didn’t seem to take as long to read as The Dalek Generation did. Maybe two plus hours instead of the three plus hours TDG took. There could be many reasons for this, and frankly, it probably isn’t important in the grand scheme, but I couldn’t stop wondering why. Well, maybe the book is shorter? If you go by page numbers, no. In fact PotCM is 254 pages, while TDG is 253.

It could be the writing style. In my review of TDG, I observed that we read a lot of The Doctor’s inner thoughts. Not so with PotCM. In fact, I only found one passage in the entire book that lifted the curtain on The Doctor’s thoughts. Maybe this was why it was easier to read?

Perhaps. Thing is, TDG definitely felt like a few episodes of Doctor Who, whereas PotCM felt more like one episode. That’s not a dig on it. It’s just a function of how many things happen in the story, how many new locales there are, how many new characters. PotCM is more contained in one location, while TDG expands across both time and space, and in each locale, we meet new people, races, mysteries, etc.

Then I decided to look closer at the pages themselves. Have a look:

See it? It’s subtle, and as I have already mentioned, not that important, and certainly not pertinent to the stories. And a bit dickish to mention to boot. But… the fonts are different sizes! That’s right, I noticed the fonts were different, and in my quest to be even more annoying (one presumes), I’ve taken time to scan the pages to show you.

By my estimation, there are about 25% more words in TDG than there are in PotCM. Doesn’t mean one’s better than the other, or more efficiently written, or more entertaining. But it’s clear that in an effort to give a similar physical value to these different books, the publisher has massaged them into being pretty much the same number of pages. It makes them look pretty on the shelf, I can attest to that. I love when things on my shelf are the same size. But, combined with the other elements of the actual writing I’ve pointed out, it does in fact explain why PotCM felt so much shorter than TDG.

My weird observations aside, Plague of the Cybermen is a lovely Doctor Who adventure tale. Without much explanation, The Doctor arrives in a small village in an age before TV or telephones – what exact age is unclear, but a guess puts it in Medieval times, and the locale is… German? Russian? Maybe Prussian. It also isn’t clear, but probably not important. The villagers are getting sick, and why? Because ages before, a Cybermen ship crash landed causing all sorts of troubles. It’s up to The Doctor to lead the villagers, especially his de facto companion Olga, to learn the true nature of the danger, defeat the Cybermen, and go on with their formerly idyllic lives. There’s some sword fighting in there, quite a bit of death frankly – some of it pretty gruesome – and great heroics from The Doctor’s favorite species, humanity. Oh, and some surprises that I won’t spoil.

The author, Justin Richards, is definitely steeped in Doctor Who-ology, having written numerous books based on the Whoniverse, including the more recent Doctors as well as some novels about past Doctors and even a series about Gallifrey (although once again, no episodes of the program). His experience shows, as he has a clear understanding of who Doctor Who is to the viewing/reading audience, and the structure of Doctor Who stories. What’s more, his style should be very friendly to non-fans, as he feeds up details through the eyes of Olga, who has also never heard of The Doctor. On that front, I would suggest this as a pretty good way to introduce people to The Doctor, perhaps more than watching an episode, in that when things start to move quickly, it’s easier to reread about them in a book than to rewatch them in an episode (as I’ve had to do sometimes when introducing The Doctor to non-sci-fi fans. Ok, to girls. When I’ve introduced The Doctor to girls).

Overall, then, this is a well crafted, engaging story. As with TDG, PotCM is light reading. No deep meaning here, no exploring the boundaries of humanity. But it does an excellent job of presenting the adventure we’ve come to expect from anything with “Doctor Who” in the title.

BBC Doctor Who: Plague of the Cybermen