When the organizers of the BunburyMusic Festival announced this year’s line up back in February, some expressed disappointment. This despite the fact the headline acts were alternative music staples Fall Out Boy (supported by the beloved Paramore), Empire of the Sun, and Flaming Lips. The rest of the line-up for 2014, as it was in 2013, was a fine balance of established acts, up-and-comers, and top regional acts.

The main difference in 2014 was that this year’s acts seem to have been chosen for their ability to kick it live. Sure, bands like Walk the Moon and twenty one pilots delivered incredible
live performances last year, but this summer it felt like everyone showed up hoping to generate the same buzz as those bands.  It makes perfect sense. In this day when many bands make most of their money on the road, having a reputation as a great live act can be a real boost to the bottom line.
Bunbury is held in Cincinnati in the adjacent riverfront parks of Sawyer Point and Yeatman’s Cove. This year’s festival was an immediate improvement over last year’s event, by virtue of the two main stages being separated. In 2013 they faced each other, but this year they were placed at opposite ends of the grounds. The increased travel time (about five minutes walk) was far preferable to the bottleneck that developed last year. 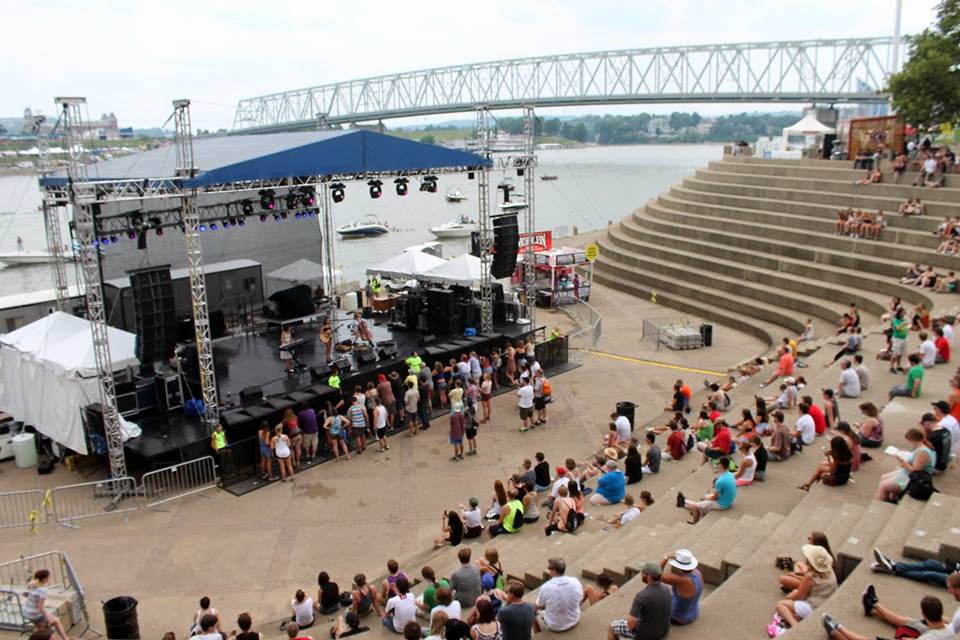 Judging from the number of out-of-town license plates in the parking lots and on the streets, a lot of fans travelled to the Queen City for the 3-day event. Indeed, many came from Northern Ohio, about 4 hours away, as evidenced by the number of LeBron James and Cleveland Cavaliers merch being sported. The first day of the festival coincided with King James’ announcement that he was coming back to Cleveland, news many acts took as an opportunity to misguidedly gauge fan reaction. Cincinnati doesn’t have a pro team, so there are Cavs fans here. However, the two colleges, University of Cincinnati and Xavier, are far more popular.
In any event, the weatherman was kind to festival-goers, for the most part, as unseasonably cool temperatures greeted the festival’s opening on Friday afternoon. What follows is a review of selected performances.
Friday:
Wild Cub
Nashville’s Wild Cub drew a pretty enthusiastic crowd considering their 4:15 starting time. The band was appreciative of the response, telling the crowd that Ohio is one of their best markets. However, after they finished playing their single, “Thunder Clatter,” many started to leave, presumably to get a good spot for one of the acts playing somewhere else on the grounds. Lead singer Keegan DeWitt chastised those walking away, before staring their final song. Dude, they love the single, don’t piss them off.
Family and Friends
A trip to one of the food trucks afforded a listen to Family and Friends who hail from Athens, GA, and entertained the crowd at the Amphitheater Stage with their brand of folky-rock.
Cage the Elephant
Speaking of Athens, GA, if this were the 1980s, Cage the Elephant would have moved from their hometown of Bowling Green, KY to Eastern Georgia. On paper they don’t seem like a rollicking live band, and indeed from the first half of their set you could support that conclusion. But somewhere along the way lead singer Matt Schultz wound up shirtless, flying around the stage, and by the last song, “SabertoothTiger,” was crowd surfing. 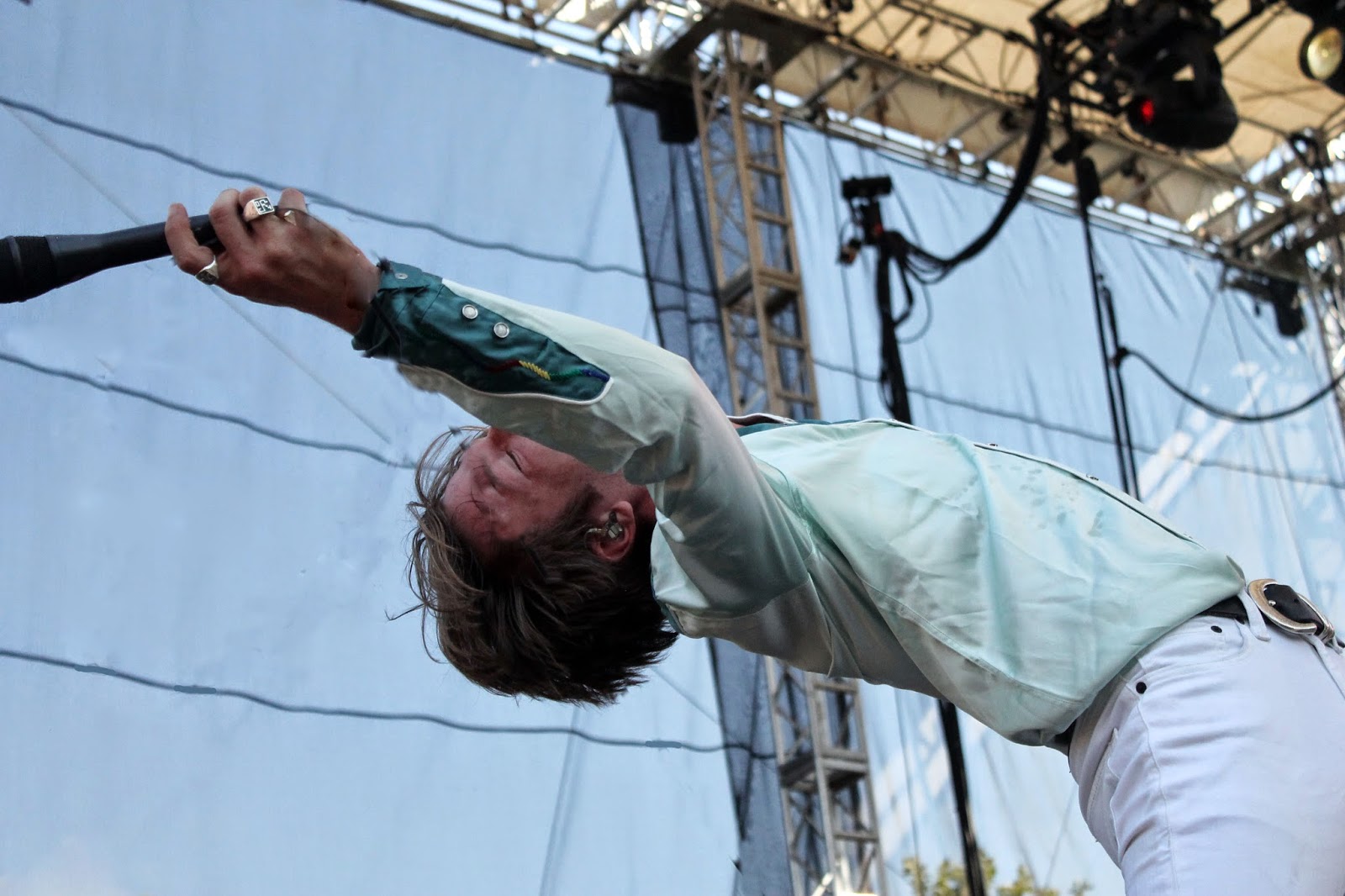 Fitz and the Tantrums
Probably the most pleasant surprise was LA’s Fitz and the Tantrums. Having filled the radio waves with catchy tunes like “The Walker” and “Out of My League,” a large crowd gathered
at the main stage to watch their set. Live, the band is very reminiscent of the Style Council: White male lead singer, black female co-lead singer, horn section, and keys. In fact, they look like the Style Council, but sound a bit more like the Jam. Their energetic set included a funky cover of the Eurythmics’ classic “Sweet Dreams (Are Made of This).” 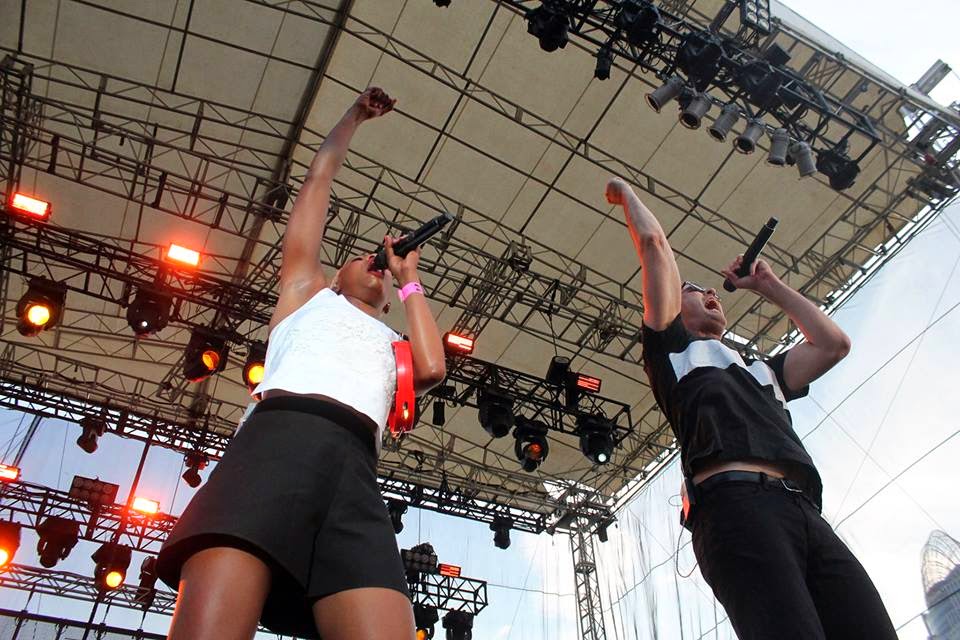 Fitz and one of his Tantrums (HW)

Saturday:
New Politics
Danish trio— well, they are two-thirds Danish— New Politics didn’t waste any time either, bursting on to the stage with “Give Me Hope.” Lead singer David Boyd punctuated a raucous
performance with back flips and hand stands, and finished the set by climbing the light rigging during “Yeah, Yeah, Yeah.” Guitarist Soren Hansen and drummer Louis Vecchio (the group’s American member) somehow managed to keep pace with their bandmate’s breathless performance. 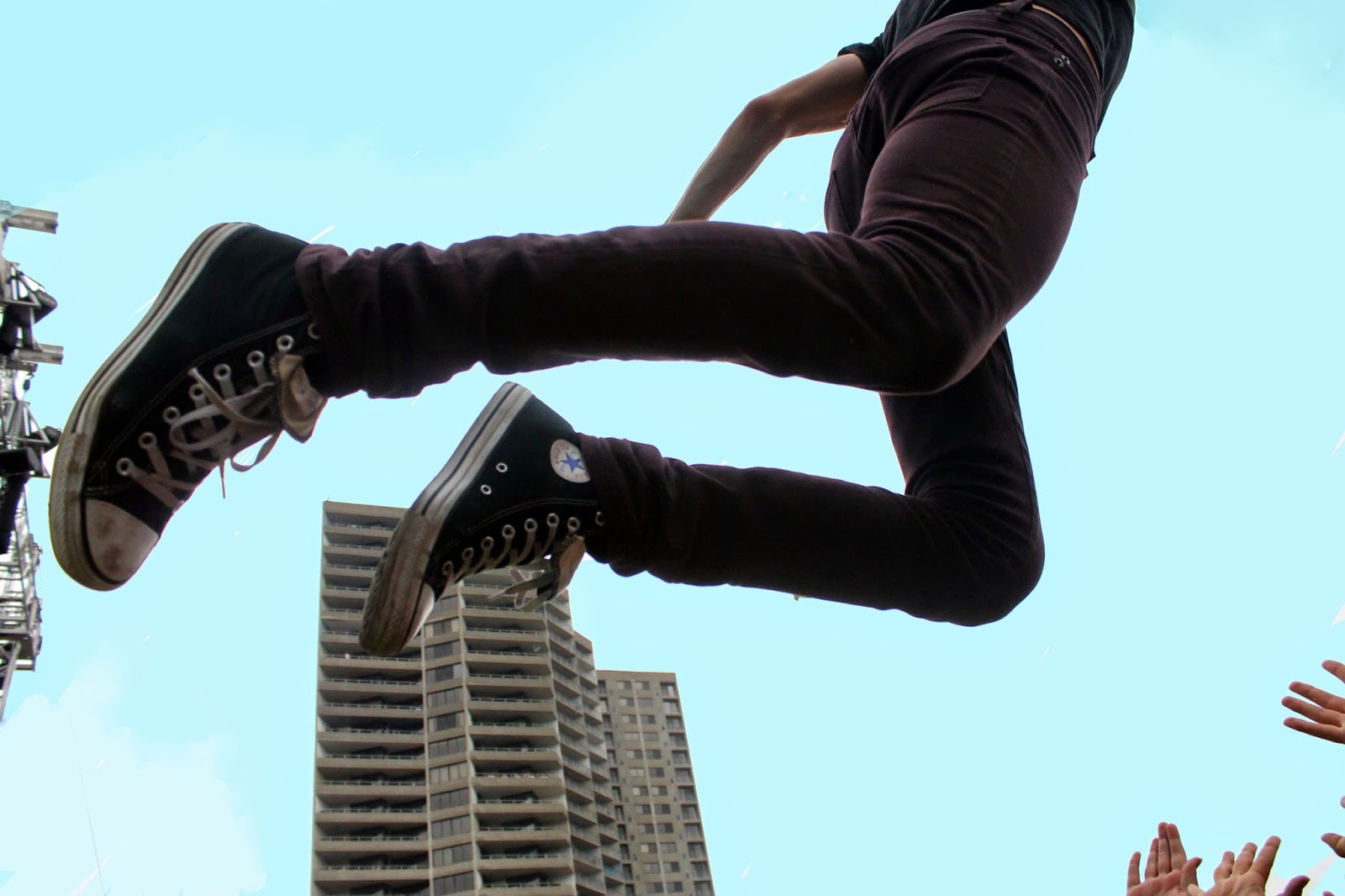 Cults
Fresh off a slot supporting Vampire Weekend, Cults took the stage ahead of Paramore. On odd placement at first, Cults allowed people to catch their breath between New Politics and Paramore, without creating a lull. Lead guitarist Brian Oblivion explained the band barely made it to Cincinnati, having been stuck in Denver only hours earlier. The hectic travel experience didn’t seem to affect them though, as they seemed even more energetic than when they opened for Vampire Weekend.
Paramore
You would think Paramore, with strong, energetic lead singer Hayley Williams, would attract a lot of female fans. However, the crowd was very dude-heavy, and most of them sang along, fists pumping, fingers pointing, to almost every track. Williams’ batteries never ran low, and in her between song banter didn’t sound the least bit out of breath. Starting with one of their biggest chart hits, “Still Into You,” might have thrown casual fans, but it was a signal that Paramore meant business, finishing the song with a blast from several confetti canons. The entire set ended with streamers being fired over the audience. The Cincinnati Reds, playing a block down the street at Great American Ballpark, coincidently punctuated the end of
Paramore’s set with hone run courtesy of Kristopher Negron. At first, many in the crowd though the resulting fireworks burst were from the band and not the stadium.  All of this lead many to wonder what Fall Out Boy had in store. 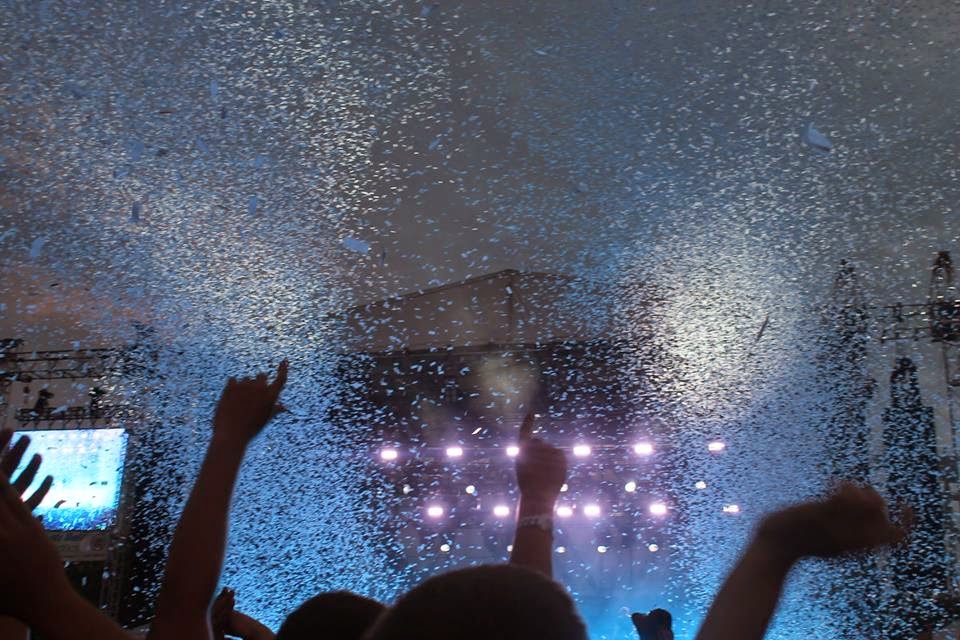 Andrew W.K.
Paramore’s performance overlapped with Andrew W.K.’s set, but a quick run over to the other main stage showed nothing much had changed with white-clad noisemaker. Like his entire catalog, you really only need a few songs to know what time it is. That being said, Mr. W.K. delivered an energetic performance and his enthusiasm certainly rubbed off on the crowd.
Foxy Shazam
As Fall Out Boy’s crew set up for the headline slot, Cincinnati’s Foxy Shazam took to the cleverly placed River Stage. They should have been on the bigger second main stage, as it was packed. Last year, festival headliner Fun gave a shout to the band to only tepid applause. People must have gotten on board since though, as the Shazam’s made their first appearance at Bunbury since 2012. Musically they’re fairly unique, though it sometimes seems like they’re making it up the songs as they go along and the audience is latched on for the ride. Visually, you can’t take your eyes of their antics particularly lead singer Eric Nally and trumpeter/back-up vocalist Alex Nauth. Later in the evening Fall Out Boy also gave them a shout out, cementing Foxy Shazam’s position as a band’s band.
Fall Out Boy
Chicago’s Fall Out Boy turned up as part of their Monumentour  (with New Politics and Paramore), and delivered a solid set. Complete with fireworks and flame flowers, they
rollicked through their set list with a lot of energy if not a lot of imagination. Bass player and acknowledged leader Pete Wentz entertained between songs with stage patter that eventually bordered on the annoying. Wentz informed the crowd that while is father took him to punk rock shows back in the day, the old man hated it complaining that he didn’t know any of the songs. This was the introduction for a serviceable cover of Queen’s “We are the Champions,” an apparent gift to all the parents in the crowd. Good grief, Pete, really? 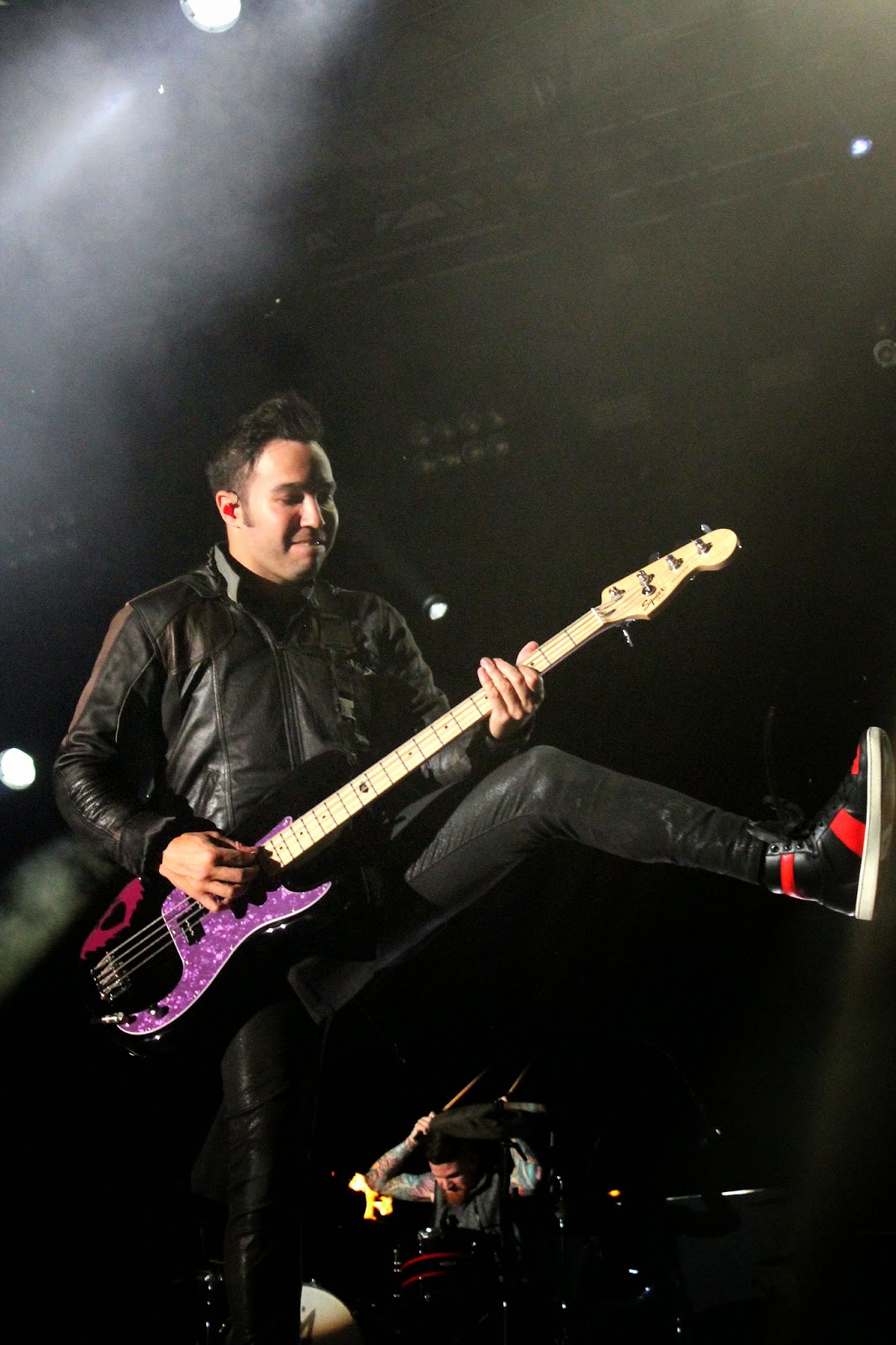 Sunday:
Easthills
While the weather cooperated for the first two days, Sunday brought a line of showers through the city that, while intense, lasted only about an hour. Sadly, it was enough to wash The
Easthills off the schedule, as the storm hit just before they were set to go on. This quartet from Munice, Indiana started back in 1997, but was sidetracked as band members started lives off stage. Their debut album Death if a Salesman, fifteen years in the making, came out last year and is a real rocker.
The Yugos
The Yugos, from across the river in Northern Kentucky, were able to dodge the rain drops and perform their set. Inspired by the new wave music of the ‘80s, and sounding a touch like Vampire Weekend, Yugos delivered a punchier sound than either of those influences.
Red Wanting Blue
Another big regional act, and festival favorite, is Columbus’ Red Wanting Blue (who formed in Athens OH). Think of them as a less twangy Mumford and Sons. A few flashes of lightening didn’t phase them, as one of the bolts punctuated one of their most popular track’s “You Are My Las Vegas. “It’s a sign,” lead singer Scott Terry exclaimed. “Buy that song!”
Bear Hands
Sounding very different from their recorded work, Bear Hands took the second main stage, and got the crowd going early. Their post-punk stylings played well to the wet, but enthusiastic
crowd.
Young the Giant
Over at the main stage, Young the Giant ambled through a nice set, but seemed drained. The hits “Cough Syrup” and the festival-friendly “My Body” were the definite highlights.
The Orwells
This quintet from suburban Chicago should have been hire up in the batting order, but when the festival was booked, they were just starting to get some heat. First there was their
well-received stint as the support act for Arctic Monkeys during the winter, then an amazing appearance on The Late Show with David Letterman, followed by a visit to London and a recording session with BBC Radio 1’s Zane Lowe in the legendary Maida Vail studios (their second visit).  For Bunbury, lead singer Mario Cuomo hypnotically drifted about the stage recalling the late Jim Morrison, but with his own distant personality coming through. Unfortunately, the stage design was a bit of a hindrance. Unlike the other main stage, the one on which The Orwells performed was built out of a permanent stage in the park. The floor of that stage sits low, so the crowd was unable to see a lot of what Cuomo was doing. It didn’t matter that much, as people unfamiliar with the band drifted off the walkway and away from the food and merch stands to come get a closer look. “Who are these guys?” people asked each other as they started bopping along. 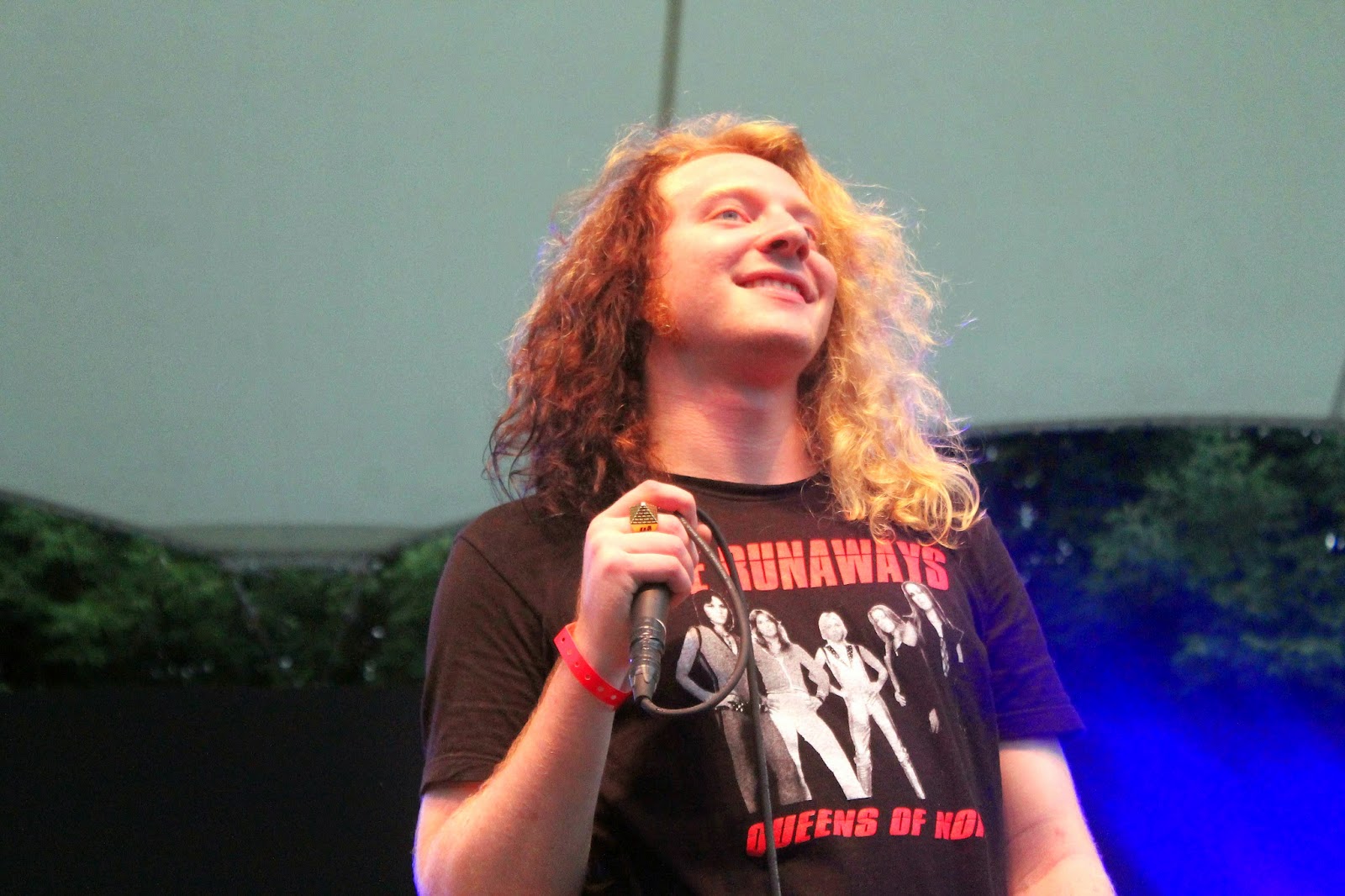 Its third installment completed the festival organizers are already planning the 2015 show. Acts will likely be announced in February, allowing fans plenty of time to plan a trip to Southwest Ohio.
(Visited 366 times, 1 visits today)