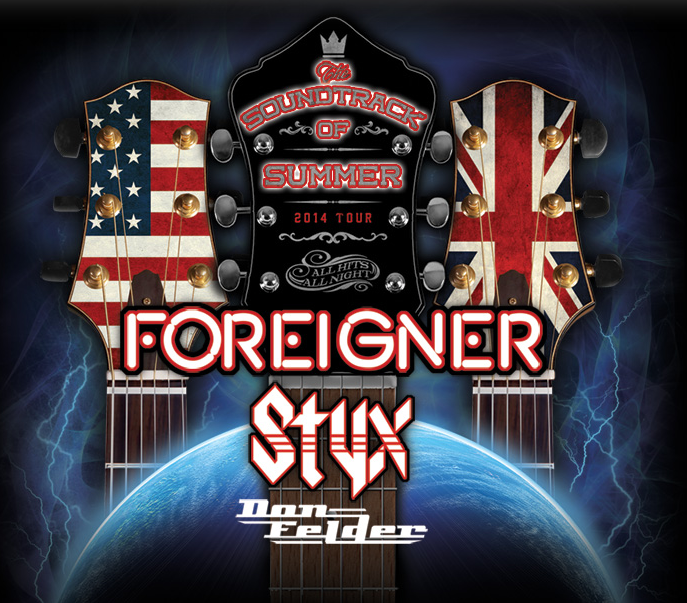 Last night under the stars at the historic Greek Theatre in Los Angeles, CA 2 classic rocks bands and 1 ex-Eagle gave the sold out crowd exactly what they were looking  for… hit songs!

Foreigner, Styx and Don Felder have been touring the country with their “Soundtrack Of The Summer” tour offering audiences the chance to hear all the hit songs they remember blasting out of their car radios for the past 40 years!

Guitarist and former Eagle’s guitarist Don Felder took the stage 1st and blazed through a 10 song setlist that included “Already Gone,” “Heartache Tonight” and “Hotel California.”  Felder may not have had a hand in writing every song he played last night but as a member of the Eagles for over 20 years he certainly had the right to play them and he did not disappoint.  As a matter of fact I have never seen an artist happier to be playing live than Mr. Felder.  His youthful grin was plastered across his face for the entire set and when he pulled out his double neck guitar to close the set with Hotel California the crowd went wild.  Joining him for the classic 2 guitar solo duel was Styx’s very own Tommy Shaw. Felder is not the best singer in the world but he made up for that with top notch fret work, youthful appearance and overall positive attitude which is certainly a far cry from that of his always cranky former band mates Henley and Frey.

Styx took the stage next with band line-up which has been in tact since Dennis DeYonug left the band in the late 90’s.  The version only contains 2 members from the classic line-up with Tommy Shaw and  James JY Young on guitars.  Fear not thought because longtime vocalist and keyboard player Lawrence Gowan just might be the best replacement player of all-time.  Gowan’s voice is powerful and he easily handles the theatrical Styx catalogue of songs such as “Grand Illusion,” “Come Sail Away” and “Lady.”  When not the center of attention Gowan is happy to lay down some lush keyboard arrangements or simply dance around the stage like a frenetic minstrel.  Gowan is and always has been a showman and you can tell that the current members of Styx genuinely like each other.  Shaw and Young played loud and heavy while bringing the audience to it’s feet for “Blue Collar Man,” “Too Much Time On My Hands,” “Superstars” and the set closer “Renegade.”  Tommy Shaw is so youthful it is hard to believe that he will turn 61 years old this year!

After Styx left the stage, with no prisoners left to be taken, it was Foreigner’s turn to prove that they deserved the closing slot.  Armed with a canon of top 40 hits the band opened with “Double Vision” the titled track from the group’s second album.  They then launched into “Head Games,” “Cold As Ice” and “Waiting For A Girl Like You.” The problem with Foreigner was that for those first 4 numbers there was not even 1 original member of the band to be found.  Original vocalist Lou Gramm has been gone for over 10 years and his replacement Kelly Hanson has been doing an amazing job keeping Foreigner going strong but without any original members this version of the band is no more than a Foreigner tribute band that is until founder Mick Jones finally took the stage for song #5… “Feels Like The First Time.”  From this point on the energy of the entire band was elevated to a new level as Jones and company rocked the house with 6 more classics.  Foreigner were joined by Felder, Shaw and Young to close out the night with an all-star jam of “Hot Blooded.”

The award for best band of the night definitely goes to Styx but the real winners were the audience who went home fully satisfied as their ears were full to the brim with a classic show that truly was the “Soundtrack Of The Summer.”

Pat Francis currently hosts the popular comedy/music podcast “Rock Solid,” called 1 of the 8 great music podcasts to put in your ears by USA Today and featuring artists such as Melissa Etheridge, Sammy Hagar and Susanna Hoffs. His frequent appearances on Jimmy Pardo’s top rated podcast “Never Not Funny” are fan favorites. Pat began his entertainment career as a stand-up comic in Chicago, IL. After touring the country and performing in 42 states at comedy clubs and colleges, he relocated to Los Angeles, CA. There he appeared as a comedian on Comedy Central, AMC, the UCB and is a yearly regular at the San Francisco Sketchfest. For the past 5 years he has also served as Co-Host of the yearly event Pardcast-A-Thon which to date has raised over 700,000 for Smile Train. When not entertaining people in person he also makes his living as a Story Producer for reality television programs. It is also important to know that Pat is a monkey in a human mask.