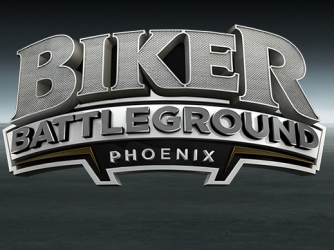 Tonight on the History Channel’s Biker Battleground Phoenix, Yaffe, Kody and Jenkins put their reputations at risk as chaos descends at Arizona Bike Week, one of the largest builder/biker showcases in the country.

Check out the exclusive clip of tonight’s episode “Respect” below:

Yaffe questions whether his SRT will succeed or fail.  In a never before done stunt, Kody and his fabricator Ricardo assemble a bike in front of an audience of his peers.  Can Kody prove he knows how to build and that he’s not a “fraud” or “poser” in the bike building world? Kody later surprises Ricardo by giving him the bike. When Ricardo finds out, he falls to his knees in front an audience of 5,000 as the crowd literally goes wild.

An anxious Yaffe finally reveals his top secret SRT on stage to thousands of onlookers. While the others builders give Yaffe props, Kody is unimpressed and shows it riding off while Yaffe is in the middle of his presentation.  Yaffe is outraged at Kody’s lack of respect and vows to retaliate.  Jenkins attempts to win the Baddest Bagger Competition for the second year in a row with his Custom Bagger. His crew works night and day but misses a major opportunity to show up on the main stage.

Watch all of the excitement and drama on Biker Battleground Phoenix tonight (July 29th) from 11:03-12:01AM ET only on the History Channel!