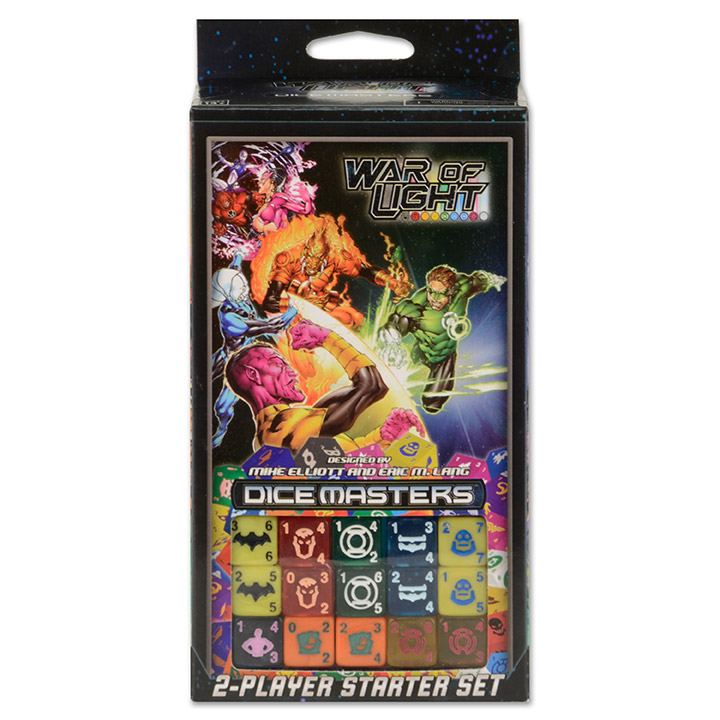 DC Comics War Of Light is the latest installment in the insanely popular Dice Masters game series fromWizKids. Based upon the Quarriors! Dice Building Game, Dice Masters has expanded its nerd reach to Marvel, DC, Yu-Gi-Oh, and even Dungeons and Dragons!

Introducing more than 30 heroes and villains (and their dice!), DC Comics Dice Masters: War of Light will be sure to shine bright as part of any Dice Masters game!

This game is very easy to learn and super fun to play! Everyone’s favorite DC Comics Heroes and Villains have donned power rings to face off in the War of Light! Pick from Batman, Green Lantern, Lex Luthor, and more to make a team and play your opponent. The starter pack has enough for two players to play and learn. With 8 characters, each with 3 separate play styles, different action cards, and ring colors/abilities the replay-ability is very high and no two games will end the same. The beauty is that this game is completely compatible with any of the other Dice Masters sets! There are also booster packs available for the War of Light to add more dice and more characters to the fray!

My only complaint with the game would be the Dice Bags that are included. It would be nice to have a felt bag rather than a paper one, but these do have cool artwork from the War of Light on it. It should be noted that a felt bag is included in the DC Comics Dice Masters War of Light Collector’s Box along with a few other bonuses!

All of these are available now at local retailers and Amazon!

DC Comics Dice Masters War of Light is a 9 out of 10 Power Rings!