In a world that has the internet, this book has no reason to exist, at least not as it is right now. 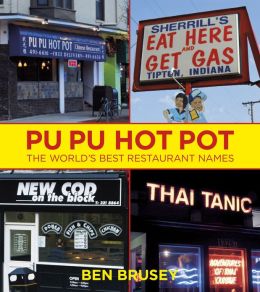 Pu Pu Hot Pot: The World’s Best Restaurant Names has no forward by the author other than the sub-title of “The World’s Best Restaurant Names”, so one must infer from that that somehow these are really great restaurant names. The example photos on the cover let us know that “best” means, presumably, funny names, and a little starburst proclaims “More than 100 snapshots of the world’s most amazing, dreadful, and utterly bizarre restaurant names.”

This is probably a taste thing, but most of the images in the book are of names that were purposefully puns. While those can be amusing, they usually aren’t, and I like puns. Restaurant owners aren’t a particularly creative bunch, and many of these display the minimum amount of creativity and humor.

To me, the funnier names are the ones that are accidentally a bad choice. Granted, those usually come from foreigners not quite in touch with the local language. But a sincere person, trying to make a good name and missing wildly, to me is far more funny than an owner trying to make a funny or memorable name. If you disagree, then so be it.

Out of the 100+ photos, maybe eight got me to laugh out loud. The rest forced me to ask the question: with access to the internet, why do I ever need this book? I think it’s a fair question, since you are reading this review on the internet. If someone has printed this review out for you because you do not have internet access, I apologize; someone wasted printing paper on this review, and Pu Pu Hot Pot might be a book you would want.

Moreover, the author writes little quips for each photo, presumably to make the photo funnier, or at least to explain why each one is funny if you didn’t get it at first. In all but one case, the text does in fact help explain the photos, but in all but a couple of cases, fails at being funny. It felt like only a couple of moments were spent on each one of these; almost as if there was no editing done at all. Like you might find on the internet.

Worst of all, at least one of these photos is clearly a misrepresentation of the restaurant’s name. It seems fairly clear that the restaurant was called “Nagina”, but careful positioning of a light pole when taking the shot makes it look like “Vagina”. Well, if I very carefully place things in front of letters, I’m sure I can make one word look like another, naughtier word.

I guess my point is, this is lazy publishing. Simply collecting a bunch of funny pictures is a waste of paper, unless some effort is put into making sure these are the funniest pictures you can find, with some really funny captions. Keep in mind that someone had to approve this project, and presumably review it before sending it to publish. Then it had to be designed and printed, and the copies then had to be made available. Oh, and some marketing was done on this, too.

Unless you are not going to have internet access to see the millions of photos like this on various web sites, or are looking for perhaps three minutes of entertainment, during which approximately ten seconds will actually be funny, I can’t really recommend this book, especially at the $9.99 cover price. Instead, head on over to Engrish.com; you’ll get as much of this kind of humor as you can stand, but with a much higher hit to miss ratio, for essentially free.