Do you enjoy Mythbusters? Then you might enjoy their new live stage show! I recently had the privilege of chatting about Mythbusters: Behind the Myths with Adam Savage, half of the pair who created the Mythbusters phenomenon.

Now in its third year, the Mythbusters: Behind the Myths live show is an effort to take a version of what the show is all about – testing myths and interacting with fans – and bring it to a live audience.

For those unfamiliar with the TV show, the hosts and creators, Adam Savage and Jamie Hyneman, both with years of practical experience in movie special effects, decided to make a show about all of the urban legends and myths we take for granted, as well as test the reality of all of the wild things we see in movies, to see if they are true to real life.

In the process, they’ve generated a unique way of looking at science and demonstrating how experimentation works, despite the fact that neither of them are technically scientists by training. What’s more, they pioneered a way of interacting with their viewing audience wherein comments online could lead to responses in the show and even revisiting certain experiments to see if changing parameters led to new and interesting results. Most often the Mythbusters are proven to have been right all along, but either way, it leads to an experience that TV audiences have responded to.

Adam was kind enough to spend a few minutes with me by phone to answer some questions about this new version of the tour.
Eliot Hochberg (EH): How is the tour different from the TV show?
Adam Savage (Adam): Pretty much in every way possible.
TV shows aren’t very glamorous. It’s a small crew for the TV show, very blue collar. Jamie and I do most of the work for what appears on camera, along with a minimal camera and sound crew. It’s dirty and messy, and at the end of the day we’re tired and achy and we go home and the next day we do it all over again.
Doing it on stage in front of thousands of people is the closest we’ll get to being rock stars, and it’s a totally different way of performing. In the TV show, we’re the audience’s avatar, but live on stage, we’re the ringleaders. You’re separated from the crowd, so we bring people on stage, the audience gets to identify with them, and we play with the volunteers, we pit them against each other. For example, we’ll bring up the youngest, smallest member of the audience and put them up against the biggest person we can find to see who wins.
(EH): It sounds like an arena rock environment. Is it more like that, or like a live stunt show?
(Adam): That’s a really good question. It falls somewhere in between, but always with our tongue in cheek. We like to break the fourth wall in the TV show, but in the stage show it’s different. But in both cases, we try to keep things fresh.
(EH): On the TV show, it seems like one way you keep things fresh is by messing with each other, especially you and Jamie. Does that happen on the tour?
(Adam): Specific things don’t happen, but the relationship between Jamie and I certainly is there. We play with the audience’s perception of that relationship, and we play the straight man/funny man dynamic. We play into those roles, but we also subvert them.
(EH): Any experiments or demonstrations that you couldn’t do on TV, but you can do in the live shows?
(Adam): We find a tasteful way to do even the most disturbing things on the TV show, and Discovery’s worked with us really well on that front. If there’s something spectacular, they want us to do it, they don’t really try to hold us back. The TV show is more about demonstrating how we determine if something is true or not. We’re not scientists by training, so that’s part of the TV show – watching us work out how we’re going to work it out. The live show is different. We can’t really do experiments per se. We can’t do experiments for 20 minutes and when there’s no result say, “Well, I guess that’s the result tonight.” We still communicate with humor and storytelling and play around with the audience and different ways of looking at things. We still communicate the joy we have in the process, by doing demonstrations rather than experiments.
(EH): So you do more demonstrations than experiments, but will any of your demonstrations have different results in different cities?
(Adam): Absolutely! Because we bring people from the audience, you never know what will happen. You have everything from shy kids to genuine nut jobs. You can’t predict how people will react on stage, it’s different every time.
(EH): Are you doing any experiments on the audience that might become part of the TV show later?
(Adam): Ah… no.
(EH): You should, that would be funny!
(Adam): It was something that we discussed early on, and certainly never say never, but frankly the way the timelines work on producing the TV and touring shows it requires two separate brains, and we’ve kept the two quite separate.
(EH): What does immersive video experience mean?
(Adam): We replaced a set in favor of a virtual set. We can use the technology to make all sorts of choices live on stage. We’re going to be using projections, and it allows us to put anything we can think of on stage.
(EH): Is there anything from previous tours that you are including?
(Adam): By all means. There’s absolutely a lot of material that you fall in love with and play for the crowds. But it’s like a magician: you can take a trick that you love and reposition it so that the story you tell is totally different. The mechanics might be the same, but the experience is new. For us, this time, we’re telling a story about how making things is really like a super power, and we’re talking about heroes like Batman or Iron Man who don’t have super powers, but we see them as “do it yourself superheroes.”
(EH): Are there any demonstrations that are more dangerous than in the past?
(Adam): While we do things that might appear dangerous on stage, anything that has any potential danger only involves Jamie or me, and of course we have insurance companies we have to deal with, so everything, even if it appears dangerous, is very safe.
(EH): Anything else you’d like fans to know?
(Adam): Mythbusters has become a part of the social lexicon, and we never expected that. So it’s been an evolution, and this show is a next step in that. Fans of the TV show will see the same sense of humor, irreverance and wonder, but under a totally different structure. It’s a totally different experience. Our audiences are everyone from children to experienced engineers, and they all have a good time and get something out of it. We don’t set out to be a “kids'” show, but even with our humor, everything ends up family friendly. I think our sense of humor falls into the Bugs Bunny model, where it’s funny on multiple levels.
(EH): With you as Bugs, and Jamie as Elmer Fudd?
(Adam): Exactly. (laughs)
***

Thanks again to Adam Savage for taking time to talk with me. Mythbusters: Behind the Myths will be playing in 25 cities in the US and Canada, starting June 21 in Las Vegas, heads to Australia in August, then back to the US and Canada in November and December with Williamsport and Philadelphia PA; Washington DC; Charlotte NC; Louisville KY; Four dates in Canada – Windsor ON, Montreal QC, Toronto ON, and London ON; Worchester MA; Hartford CT; Indiana PA; Cleveland OH; Chicago IL; South Bend IN; Omaha NE; Sioux City IA; Kansas City KS; Fayetteville AR, Grand Prairie TX; Austin TX; Mesa AZ; Los Angeles and San Jose CA.

Head over to mythbusterstour.com. Tickets are on sale now! 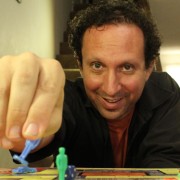