In today’s world, everyone has an opinion, and everyone is entitled to post it to the world. Why, then, haven’t there been reviews of the reviewers? That changes with this review.

I find that when I read a review, I need to know that the person doing the review meets certain standards: quality of writing is surely important; mastery of the subject matter, including in depth knowledge can also factor in; a genuine interest in the topic, developed over many years leads one to garner respect of both their peers and those being reviewed.

To me, though, this is only a part, in some cases a small part, of what determines if a reviewer is worth reading. To me, what really counts is how they present themselves as people.

I have selected five reviewers: Andrew Clark, of The Financial Times; Andrew Clements, of The Guardian; Michael Church, Gramophone Magazine; Rupert Christiansen, of The Telegraph; and Richard Morrison of The Times of London. I will rate each according to what I believe is the most important, yet heretofore undiscussed, dimension of their ability to review: how they look in a photo. 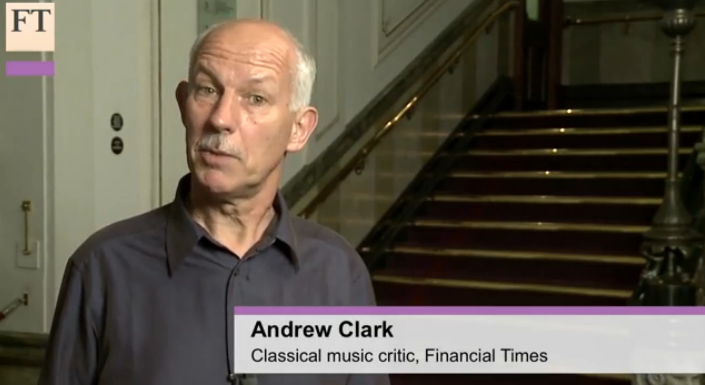 Andrew Clark is perhaps the most challenging of our group to find, as he is seldom found in a photo online. This, coupled with his rather common name, made it difficult at first to be sure what he looked like, or if he even had a face at all. However, this videoshows him in his full glory.

What, then, can I say about Mr. Clark? First off, his hair is graying and thinning. To some, this might lend him an air of knowledge, demonstrating how his age would give him experience in the topic at hand. To me, it shows he really doesn’t care. After all, there are numerous dyes that could be employed to improve his hair color, and various medical techniques that would give him more hair. Overall, then, his hair alone demonstrates a lack of judgement, taste, and style the causes me to lose faith in his opinions.

Moreover, I note that he also has jowls and loose skin hanging off of his neck. This may indicate that he used to be overweight, and there would be some who would praise him for the very practical matter of improving his health. I for one would point out instead that if you’re going to improve your health, mental health is certainly important, too, and nothing improves mental health more than looking your best. Thus, I find it distracting to know that Mr. Clark has failed to get any surgery at all that would compensate for the presumed weight loss.

Finally, what is that on this man’s lip? I guess it must be a mustache, but the white hair against the white skin makes it nearly impossible to tell. Of all of my criticisms of Mr. Clark, this is the one he has the most control over. I must assume that he grows this mustache to hide something wrong with his lip, perhaps he cut himself mailing a letter of complaint to some opera company whose cast he didn’t approve of. One can hope.

Here’s another winner in our review of critics. And by winner, I mean loser, because irony. I assume the hair style he has chosen is intended to be devil-may-care, sex-bed-head; instead, it just comes across as I-don’t-care-what-I-look-like and dead-animal-on-my-head. There is a very real chance that his hair is in fact a toupee, and if true, at least Mr. Clements makes an effort; one shudders to think what he might look like bald. But surely one of so acute a sense of taste as to be retained by The Guardian must make enough to afford a realistic head of hair.

And if it isn’t a toupee? Perhaps he should consider getting one.

As for the rest of his countenance (that which can be seen, at any rate; why aren’t there full body photos of these men readily available online?), it’s clear that Mr. Clements has enjoyed his share of gourmet (or gourmand) meals. The chin count I believe is at three, but perhaps four. I leave it to you to choose.

Kudos to Mr. Church for having a passable head of hair. While thinning, at least it appears to be real, and decently groomed.

Where I take exception with Mr. Church is primarily his eyes. They are set very widely apart, and are so light colored that they almost disappear. Have you heard of colored contacts, Mr. Church? Look into them.

In addition, it is clear that Mr. Church is older, or perhaps just simply old. Wrinkles around the mouth and eyes, elongated nose, and the aforementioned thinning hair. Do I really have to ask at this point whether someone of his age can continue to be relevant? Looking at him, I am sure of the answer. No. 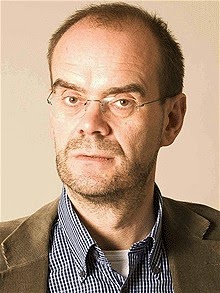 Finally, someone who doesn’t appear ancient. Mr. Christiansen looks the part of cutthroat arts critic. Corduroy jacket, wire-rimmed glasses, a bit of scruff of a beard. How unfortunate that his head is so very large.

Some might argue that this indicates an ability to think more critically, provided by what one presumes is a much larger brain. And the choice he has made to cut his receding hair quite short reenforces this idea. And yet… to me, he comes off less as a sophisticate and more as a Neanderthal. This brings to the fore how important looks are to a critic. How can I take you seriously if all I can visualize you doing is banging two rocks together and running away from a saber-tooth tiger? 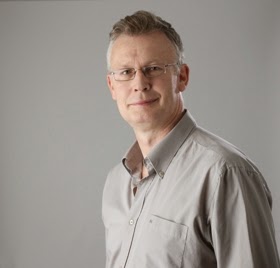 Ah, but then there’s Mr. Morrison. Full head of hair, thin framed glasses, fitted shirt. Reasonably trim, and he even appears to be quite tall. Not too old, a little grey on the temples, but that could have happened to him in college. Well shaved, with what appears to be very smooth skin. This is what a critic should look like.

He even has a smug smile. A smile that says “I can judge you any way I like, even if it’s not germane to the topic.” This is a man who knows that he can write literally anything without consequence. And he can deliver his writing with a look that says “When it comes to expressing taste and style, it doesn’t matter what I write.”

Mr. Morrison should do a calendar. Maybe pose in a bathing suit in a couple of the months (summer, certainly), or just stepping out of the shower. I hesitate to over-sexualize the imagery, after all as a heterosexual man I can’t claim to have knowledge of what would be best, but how about a shot putting on his shoes by the bed? In his underwear, of course.

I am sure that such a photo calendar would cement Mr. Morrison as the premiere arts critic. And show those other guys what they need to do if they want to be taken seriously.