Megan Mullally and Nick Offerman on the same stage? What more could you ask for?

Tonight I had the pleasure of seeing a preview of Annapurna at the Odyssey Theatre in West L.A. A play by Sharr White originally performed at The Magic Theatre in San Francisco in 2011, it is the story of Emma and Ulysses, a divorced couple who encounter each other after 20 years, played against the metaphorical background of the first 8000 meter plus mountain to have been climbed, Annapurna. Ulysses is a down on his luck writer living in a remote trailer park in the mountains, and Emma has tracked him down for a final reckoning. This production stars Megan Mullally and Nick Offerman, both currently known for roles in Parks & Recreation on NBC.

The stage is filled with a 60s style trailer that is Ulysses’ home. Strewn with garbage, books, clothes, and more, the art direction on the one space we see throughout the entire play is stellar. I especially noted the way ambient and effects sounds came from on stage rather than through the house speakers. A shower is more convincing when the sounds are coming from where they should come from. This attention to reality really set the stage for this play.

The play itself has a lot of humor in it, although like most plays, much of the dialog isn’t really anything actual people would say. Given that this is theatre and not film, one can forgive some of that stilted dialog. The humor in the writing isn’t particularly original either, especially given the unusual location of the trailer park. But this is a drama first, and as a study in how two people deal with looking back at their lives apart from two different perspectives, again, that can be forgiven. 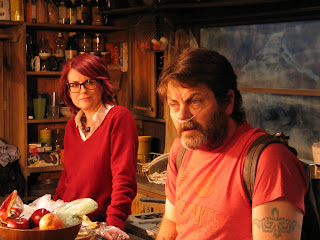 Thus, the play is highly dependent on how the actors deliver those lines, and make them seem like something people would say. Offerman and Mullally deliver with mixed results. For those familiar with Offerman’s work as Ron Swanson on Parks & Rec, his Ulysses serves up a softer version of the rugged nonsense that is Ron Swanson. When it hits, it’s very satisfying, and his vulnerability is often believable and poignant. There are a couple of forced moments, but overall, his performance breathes on stage.

Mullally seems to have more of a challenge with the material. Her tough as nails delivery, common to most of her work on TV, may not entirely fit with the audience’s expectation of a character who, despite her better judgement, feels compelled to search out the man she divorced so long ago. That said, after the first third of the performance, Mullally finds a groove with Emma, and discovers a happy medium that is still compelling and watchable. She seems to find a place partway between her own typecasting and the style seen from another TV actress, Mary-Louis Parker, in Weeds. And that probably is where the dissonance comes from. While there are certainly relationships between these two types of people that end up where they do in the play, the script seems to want a more vulnerable character from Mullally.

It’s clear that this husband and wife team are enjoying themselves, though, and that alone pulls the audience past any nitpicks that might be found. And they demonstrate that they are seasoned pros. At no time do you feel that they aren’t in control of the material. One also guesses that as the run progresses, both will settle into the roles and find that little extra bit that will make the play theirs and get beyond the script.

While not a home run, then, this is still a worthwhile play to see, and it’s telling that while it runs 90 minutes, it hardly feels that long.

7 out of 10 trailer hitches