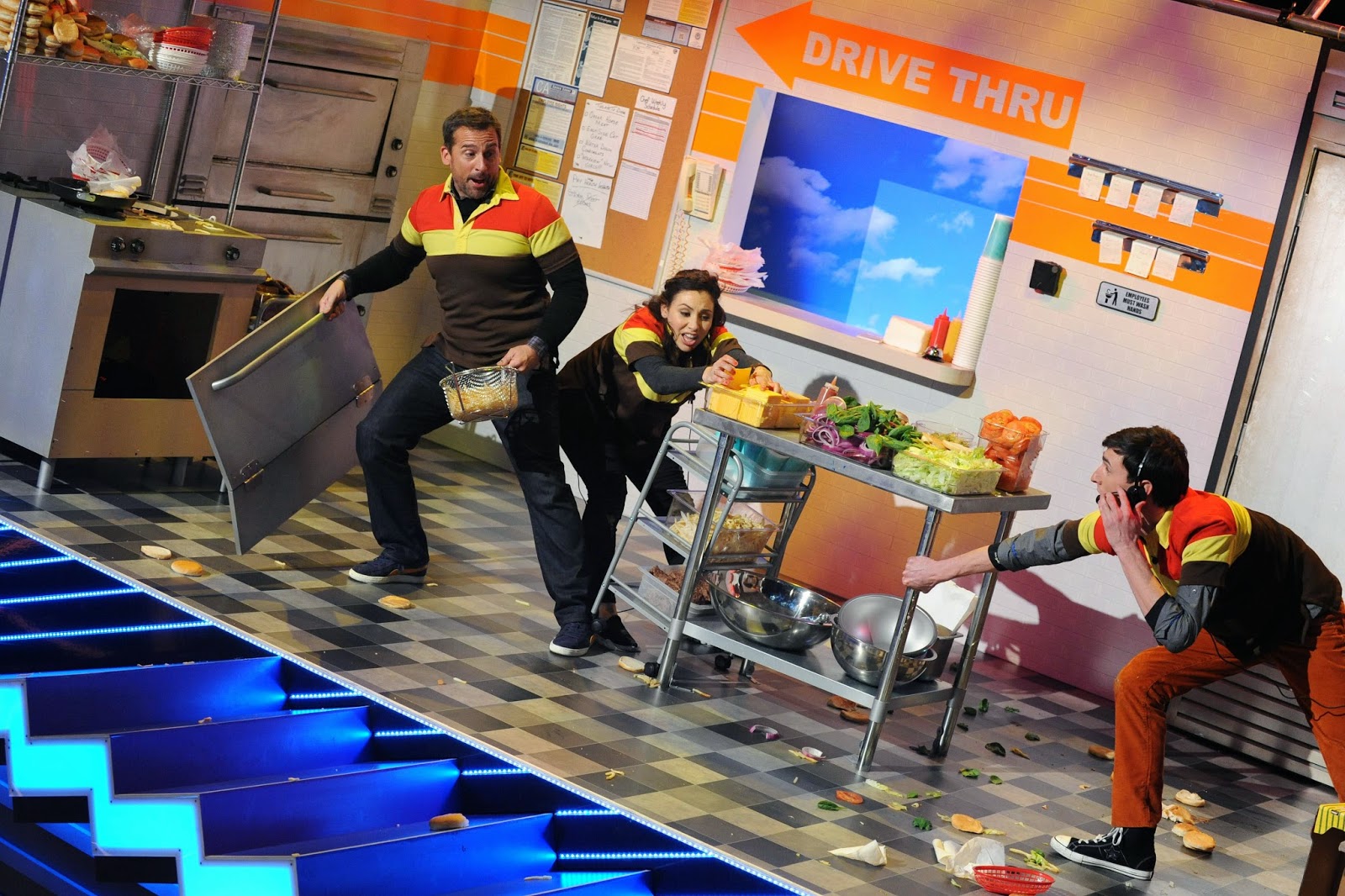 Ok, I admit it. I’m an improv snob. Partly because I’ve done quit a bit of it, and partly because I’ve seen some of the greats live (and even (humblebrag) performed with a few). When I heard about Riot, Fox’s newest stab at improv on TV, I had my doubts.

Riot is executive produced by Steve Carell and apparently the people behind Master Chef. The premiere episode guest starred Mr. Carell and Andy Buckley (The Office), with show regulars Meryl Hathaway, Jessica McKenna, Rob Gleeson, Brian Palermo, and host Rove Mcmanus, all of whom throw themselves headlong into the show, to their credit.

A little history is in order.

While there are a lot of shows that could be considered improv, like portions of The Carol Burnett Show and The Flip Wilson Show, those were unintentional. And talk shows really don’t count, in my book. For me, the originator of real group improv on television is of course Whose Line Is It Anyway?, originally from the UK, and later hosted by Drew Carey and Aisha Tyler. Those shows succeeded in part due to simplicity, in part due to how much they shot (I once went to a taping, and they shot for almost three hours for a 30 minute show), and partly due to editing. It was, though, as true to improv as you could get, and in general they managed to capture a live audience’s experience of short form improv (sometimes called “barprov”) which, while not necessarily sophisticated, was definitely entertaining, and often led to some pretty good, deep laughs.

Then, of course, there are all of the semi-scripted shows like Reno 911 and Curb Your Enthusiasm. To me, those were hit or miss, with Curb keeping me interested a bit more than Reno, although there are those who are huge fans of both.

In the footsteps of Whose Line were Drew Carey’s Green Screen Show, World Cup Improv, ASSSSCAT from UCB, and then of course Thank God You’re Here. Green Screen suffered from an issue with connecting what was happening live with the graphics and post tricks they were trying to do. I didn’t really watch World Cup (probably from bitterness at having auditioned and not made the cut). ASSSSCAT, in my view, was the truest of all of the shows to what it’s like to see a long form improv show live, but without the immediacy of actually being live, felt flat for me. However, it may have been the most critically successful of this group.

Then you have Thank God You’re Here, a transplant from Australia, which in concept was great, and had great improvisors. In my view, that show’s problem was that it failed to let the improvisors improvise. The beauty of improv is to acknowledge what’s happening and work from there. TGYH always insisted on certain beats that made no sense from the perspective of what the guests said on stage, and so you ended up with seasoned improvisors being forced to break the cardinal rule of improv: don’t deny. Not simple as always saying yes, denial is more about not breaking the reality that’s being established, and that’s what they were forced to do. Despite the live audience response, the failure of that show I attribute to that one major flaw.

When I heard about Riot, another Australian transplant improv show, I feared that it was TGYH all over again. I was wrong, and happily so. While not yet at the level of Whose Line, the show has a lot of promise. My favorite bits were ones in which they take the mundane games of Questions and ABC and add a twist: fail to follow the rules, and you get yanked into the rafters. Very fun, especially in the premier when Carell realizes he can’t continue by using a question, so instead justifies being yanked up in character. That kind of improv is awesome, and the fact that it happened made me smile and gave me faith in the producers.

The centerpiece bit of the show is Slide Show, which is what the Australian show was called. In this bit, the stage is tilted at 22 degrees, but the camera makes things look horizontal. They use it twice, and while the performers all participated valiantly, the second one was more successful than the first. I think the main reason is that the second set-up, recruits in the military, gave some better opportunities to settle in and try and look normal while being at 22 degrees. The first, set in a burger joint, had plenty of slapstick, but it goes by so fast that the players don’t really have a chance to acknowledge the reality of someone supposedly on a flat surface sliding around for some reason towards the door. That said, both scenes had genuine moments of comedy, like when Carell discovers that the fake smoke on stage isn’t good to breath, the door comes off the oven, or successfully tossing burgers in the burger joint; and when the other guest, Buckley, tries to stand straight at attention but can’t manage because of the angle in the army scene.

The best part, though, in my view, is the fact that the host isn’t just there to add bumpers, but is part of the performance. This is especially true in Slide Show and a scene played in the dark. The host, Rove McManus, does a decent job of throwing suggestions at the performers when things get slow. There are other games, like Shadow Puppets, where the basic game is charades. I frankly could do without them, although Shadow Puppets at least uses an intriguing method of having the performers use a giant shadow screen to give clues. I’d rather see them try and tell a story that way.

What, then, is the verdict? The show is long, at 44 minutes, which would be fine except some of the bits don’t quite hit. It’s improv, though, so that’s to be expected. Overall, then, I would say it definitely avoids the pitfalls of TGYH by thankfully allowing the improvisors (and the guests) to actually improvise! That gives me hope that with time, it could really get better. Lose the guessing games, shorten the show, and you could have something really good. My only fear is that they will need to cycle in new props and sets in order to keep things fresh, since one of the traps of short form improv is that eventually you end up doing the same jokes over and over.