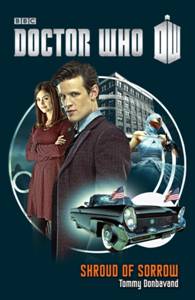 Now we come to the third and final book released by the BBC for Doctor Who that falls squarely between episodes 7 and 8 of the 2012-13 series. This time out, we have Shroud of Sorrow, by Tommy Donbavond. This story is set in (mostly) Dallas, Texas, 1963. The events of the assassination of JFK figure prominently, but the assassination itself isn’t the subject of the story. Instead, like a few episodes of Doctor Who of recent vintage, human emotion is instead the focus. Seems people’s grief is causing them a bit of extra dismay, in the form of the alien Shroud which feast on it, and that’s as far as I dare go with the explanation, for fear of spoiling the story.

Donbavond, once again as with the authors of The Dalek Generation and Plague of the Cybermen, does an excellent job of hewing to the style and structure of a Doctor Who adventure. In this case, I’m calling it a two parter (and for those paying attention, yes, the font size bears this out), at least in TV episode terms. A great feat, considering that this is his first foray into Doctor Who writing. He even gives thanks to Justin Richards, who both wrote Plague and is the general story consultant for these BBC Doctor Who books, for helping him. Oh, and once you’ve read the book, I recommend jumping over to his Wikipedia page. I think you’ll find at least one interesting fact that will make perfect sense after you’ve read the book.

I thoroughly enjoyed this book. Like the other two, this is light reading, very entertaining. There’s a bit of heavier handed commentary this go round regarding the military, which seemed a bit out of place. Couldn’t see what it had to do with the overall flow of the story, but it was fleeting, so I don’t see why it can’t be forgiven.

Another thing I noticed was a bit of science that didn’t make much sense. Now, before you comment (actually, no, feel free to comment first. Go ahead, I’ll wait). (Oh, um, you don’t know what to not-comment-but-go-ahead-and-comment-on yet. Right.)

Where was I? Oh, yes, another thing. Doctor Who is of course not exactly science fiction, it’s more science fiction/fantasy, and so there is a lot of room for things not quite lining up with science. Still, more often than not, there’s a sort of scientific logic that typically follows all of the mysteries and solutions The Doctor comes up with, and it’s no different here. In fact, at one point (and I don’t think this really spoils anything), The Doctor gives a fairly current explanation of wormholes to the characters of 1963. And that’s great, that’s what I expect from The Doctor. What I didn’t expect was that, for some reason, wormholes are powered by emotion. Again, I don’t want to give anything away. But when you read page 141 of the book, you may see what I mean. Somehow, emotion effects where a wormhole lands, and then we just move on. No other explanation. No “It’s because of what an attacking space alien is doing”, nothing. He says it as if it’s just another part of science and physics. And it bothered me. A bit. I’ve moved on. Mostly.

Also worth noting is that throughout, the book is pretty American in its terminology, unlike the other two books in this clutch, which seemed to fall squarely in British English. It stuck out, then, when the word “lorry” was used, just once, instead of truck. I guess I’m that guy.

Again, these are just small quibbles. Well, the science thing maybe not so small, but still, an enjoyable read, very well done, and I found myself having satisfyingly experienced what I had expected: a Doctor Who adventure.

Overall, then, what of the three books as a whole? They aren’t a trilogy, really, but in a way they are. Certainly they are being released together, and they exist in a particular time in this Doctor’s life. Taken that way, and maybe I missed a note that confirms this, but I suggest that the order to read them is Plague of the Cybermen, The Dalek Generation, and Shroud of Sorrow. Why? Well, because Plague is the most accessible of the three (which are all very accessible); Dalek goes a little further; and, despite that fact that as in Plague, we don’t really know The Doctor’s inner thoughts, Shroud throws around Who-istic references without much explanation. And so it probably isn’t the one to start with if you’re not already a Who fan.

What it lacks in explanation, though, it makes up for in foreshadowing of the next portion of the series. First, and this is no spoiler, she’s right on the cover, Clara Oswald is in this story. And second, I think we get a pretty good idea who The Doctor will be focusing on for the next little while.

BBC Doctor Who: Shroud of Sorrow