Since we’re still under caution to stay at home, to not travel, and to be safe, one of the neatest things to do is to plan trips for after our world is safer. I’m doing a tour of odd henges around the US, and today we’re going to visit Carhenge! Located in Alliance, which is on the far western side of Nebraska, it’s a fun place to visit. 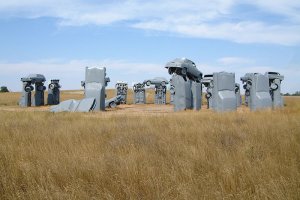 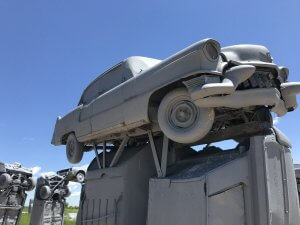 Experimental artist, Jim Reinders,  has a history of using curious media to make his art. He became so enthralled by the beauty of the famous Stonehenge in England that he knew he had to recreate it. However, instead of using stone, he decided to embrace a more modern, Americanized approach. Shortly after his fathers death in 1982, Reinders developed the idea to build “Carhenge.”

During a family reunion five years later, with the help of quite a few family members, Reinders used thirty-eight cars to mirror the position of the rocks that make up Stonehenge. All the vehicles, which include a handful of cars, a pick-up truck, an ambulance, and a 1962 Cadillac as the heel stone, accurately depict the real deal.

The family completed the sculpture just in time for the Summer Solstice, and celebrated their achievements with drink and song. The residents of Alliance were initially unhappy with the presence of Carhenge, believing it to be an eyesore, but over time the town has grown to accept and love the structure that put Alliance on the map.

Located at 2141 County Road 59, 3 miles north of Alliance, Nebraska on highway 87, Carhenge is open to the public 24/7. For a rather spooky experience, go view this sculpture with nothing more than flashlights in the middle of the night. It feels a little like you’re encountering an automotive zombie rise. Bring a Sharpie with you, because there is a car on top of the hill that you can autograph, if you’re so inclined.

Thanks to Atlas Obscura for more information about Carhenge.