Apparently I have a few folks who enjoyed the idea that a pop-culture site would review grocery store food. Check out my review of this pasta sauce if you want to see what caused the stir.

I’m doing it again, and I’m not ashamed. Because when it comes to this kind of food, it’s only worth reviewing for me if I think it’s great, or if you need to be warned against it.

Thankfully, I have another winner to share with you. 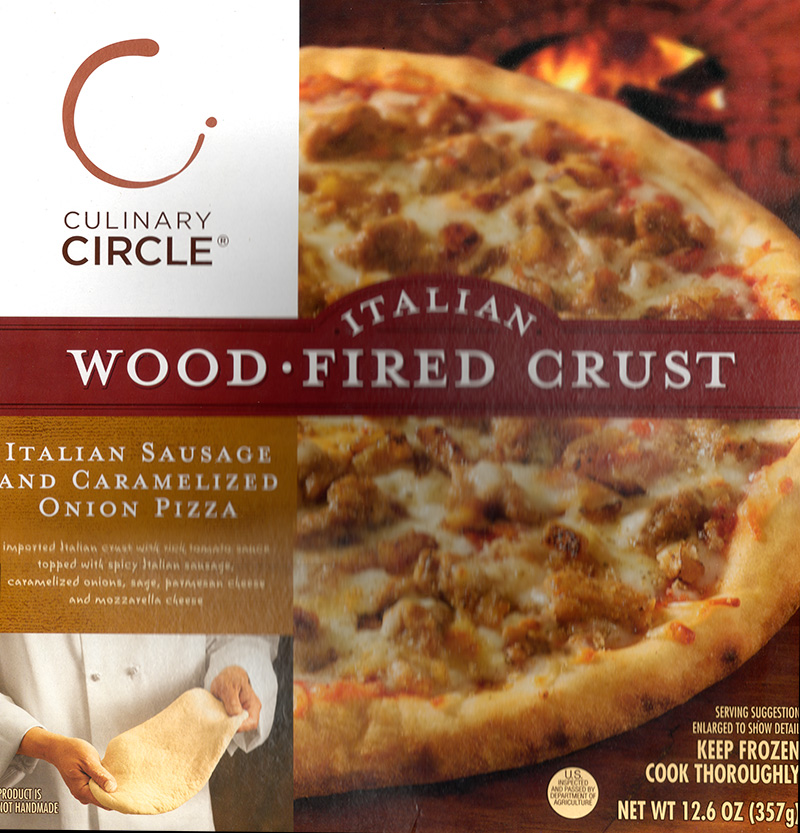 (note: in the lower left, it makes clear – product is not hand made.)

Recently I stocked up on canned and frozen foods, because every once in a while you have to. Among the various items I got (some bagged meals, which I’m a fan of, some boxed individual meals for when I’m lazy which is more often these days), I thought I’d get a few pizzas as well. That’s when I came across the Culinary Circle line of pizza.

I’d seen Culinary Circle before, bought a few other products, but didn’t notice anything remarkable. I pretty much thought it was a fancy attempt at a store brand. And that may be what it is, I can’t really tell from their web site.

What I can say is that I was very surprised by this Italian Wood-Fired Pizza. Can’t tell if they are still selling it, or if they were getting rid of them. They don’t appear to be on the Culinary Circle site. The one I got was Italian sausage and caramelized onions. The surprise came because, unlike most frozen pizzas I’m used to, which have definitely gotten better over the years, but which still have that sort of metallic taste, probably because of the salts and nitrates/nitrites and other preservatives they add; this pizza really tasted like pizza. Like fresh pizza.

Let’s not go crazy, I will still take a real, fresh made pizza over one of these. But this one is actually good, better than some cheap fresh made pizzas you might find out there. Flavor-wise it’s better than Dominos, and texture-wise it’s better than that or say Sbarro. I know, that’s not much of a compliment. But the truth is that it’s actually a good pizza, and I suspect that if you served it without telling people it came from frozen, they actually might ask you where you got it.

Part of this may be due to, again like the pasta sauce, the ingredients. The pizza isn’t as purely made from recognizable ingredients, natural onion flavoring and xanthan gum come to mind, but there are none of the nitrates and weird sodium chemicals. Plus, the crust is blessedly simple: flour, water, olive and sunflower oil, salt and yeast. It doesn’t contain the dough conditioners that say a Red Baron pizza might have.

I’m not suggesting this is healthy or some kind of magical culinary miracle. I am saying, though, that when faced with the challenge of selecting a frozen pizza in the $5 price range, I will definitely have the Culinary Circle brand on my list.

I have since tried a few other of this product line. First, I can say without reservation that the other lines (self rising, etc.) aren’t nearly as good as the wood-fired line. They aren’t bad; just not any better than other brands. As for other flavors of the wood-fired line, they seem to not be as good as this particular flavor. The vegetable one is particularly disappointing, due to the water content of the toppings, I believe. There’s also a pepperoni one that suffers the same problem as most frozen pepperoni pizzas – the pepperoni comes out weird, somehow. This means that it is only the sausage and onion one that surprises and is really good all the way around.

Under $6, Albertsons, see site for other sources
7 out of 10 slices