Here’s a fun little game that can appeal to just about everyone. It’s simple to learn and play, yet it has enough variety that you can play it over and over and learn different strategies. And above all, it’s pretty short, so even if some of your players aren’t into it, you can quickly move on to something else.

The first thing that sets Forbidden Island apart from most games is that it’s a cooperative game. Set on an island that is slowly sinking, everyone must escape for you to win the game. But before you can escape, you must collect four treasures: earth, wind, fire and ocean. You then have to get your helicopter to fly away.

The setup is really simple: first, the board is set up. It consists of 24 tiles, each with a full color side and a blue side. They are set up at random with the blue sides down in a diamond formation. The treasures are placed next to the board, and then the decks are divided out: treasure, flood, and adventurer. Players then draw six of the flood cards to find out which locations are already sinking. This is indicated by turning them over to their blue side. Now, each player (2-4) chooses their character at random from the 6 types available. Each type of adventurer has their own special skills. For example, the Explorer can move diagonally, and the Scuba Diver can move through water. Then, players get treasure cards and the appropriate water level is set on water meter.

Once the game is set up, game play is easy. Each turn consists of up to three actions per player, drawing of treasure cards, and drawing of flood cards. The treasure cards allow you to “find” the treasures. You have to have 4 of the correct type before you can go to the treasure’s location and collect it. Keep track of where it is! There are only two locations for each treasure, and if both sink completely, the game is over because you can’t capture that treasure!

Players have the option of moving, shoring up tiles that are flooded, giving cards to other players (when they share the same location) or capturing treasures. Working together as a team, you come up with strategies to prevent too many locations from flooding. If a flooded location floods again, it sinks and is removed from the board!

The bulk of the game, in my experience, is in talking with other players to decide the best course of action. Like most cooperative games, the game is trying to kill you, so listening and cooperating are essential to winning. 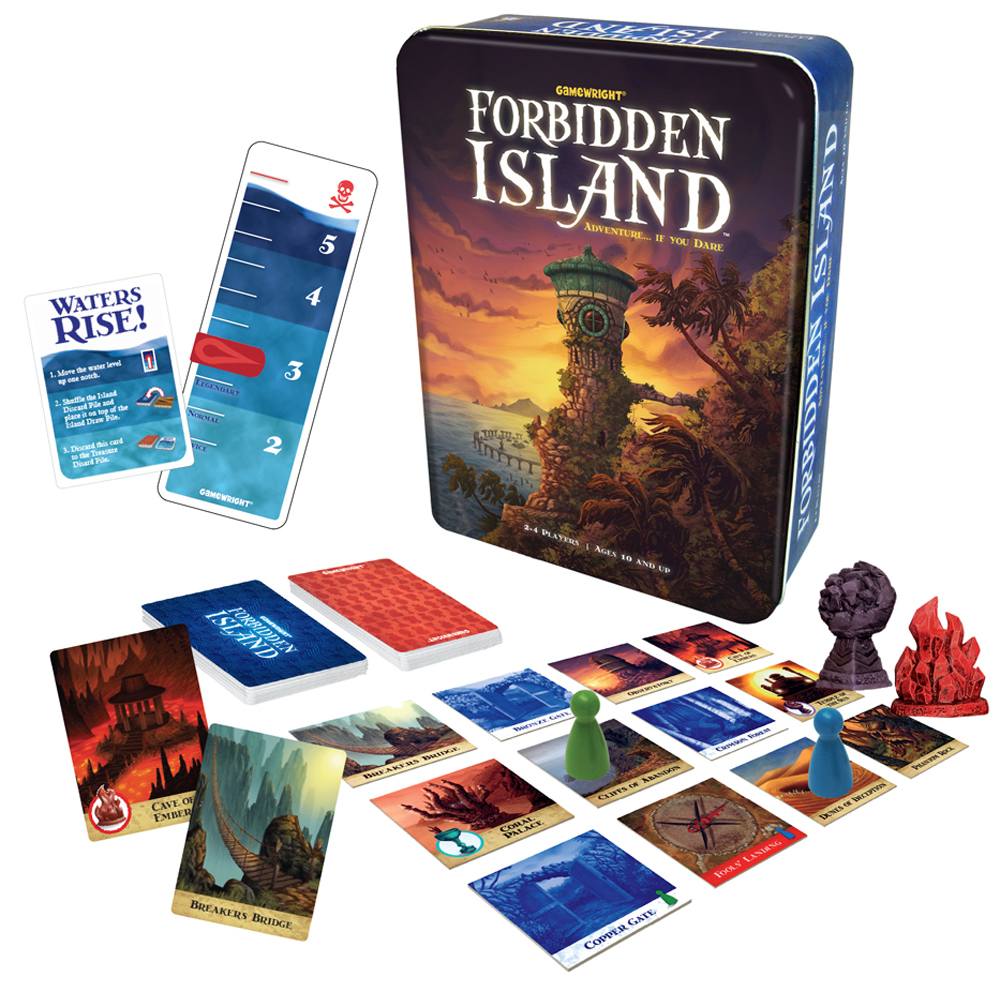 The game itself is pretty reasonably priced at $18, it’s made from good quality pieces and has a metal tin to contain them. This is one of those times I wish game companies would agree upon a size for their packaging, since there is no actual board dictating the size of the container. But that’s a small quibble. This is a great little game that takes about 5 minutes to explain, less than that to set up, and about 10-20 minutes to play. I’m hoping that Gamewright releases an update or expansion, as this game would benefit from that for repeated game play. It’s definitely replayable, but if you always play with the same folks, it will probably lose some luster after the 12th time or so. That said, folks online have created alternate board layouts and rules that are fun that you might want to check out.

8 out of 10 sandbags (for slight limit on replayability)

Be sure to check out the previous review of Arkham Horror