Because I’m going to be training to do improvised William Inge plays, I thought I’d get a jump on things and watch some of the films based on his work. Turns out they’re very difficult to find on Netflix instant; only one was available that I could find, Bus Stop from 1956.

Starring Marilyn Monroe and Don Murray, it was directed by Joshua Logan with a screenplay by George Axelrod. And boy, did they do a bunch of writing. You see, the original play was set completely in the bus stop referenced by the title. A bunch of travelers are stuck overnight due to a snow storm, and we see blossoming love between the driver and the bus stop owner, a professor trying to impress another passenger, and the main conflict between Bo and Cherie. See, Bo has convinced (maybe even kidnapped) Cherie to come from the big city to marry him and move to his ranch. At first, she wants nothing of it, but then is convinced that maybe he can be the man she needs.

That’s a fine story, but this isn’t a review of the play.

In the film, we really focus on Bo and Cherie, and see what happens before they get to the bus stop. Bo is 21, on his way to his first big rodeo, where he believes, rightly as it turns out, that he will win every contest he enters. Before he gets there with his pal and father figure Virgil, Virgil lets Bo know it’s time he starts thinking about getting himself a girl. This awakens a sleeping giant… future abuser. Bo is the kind of man who just takes what he wants, except up until now, all he wanted was to run his ranch (that he presumably inherited, perhaps I missed that, but it seems it was never made clear). He decides that he will know his “angel” when he sees her, and she’ll be the one for him.

On the way to Phoenix, AZ and in the city proper, Bo sees plenty of girls, but none of them are his angel until he meets Cherie, an attractive, if lacking in talent, singer in the local club. She’s being used by the owner to get drink money out of patrons; in fact, Virgil buys her a bunch of drinks at full price that turn out to be tea and not whisky. Cherie, for her part, isn’t really smart enough to know any better or fight for herself. But she does have a dream: to get to Hollywood. 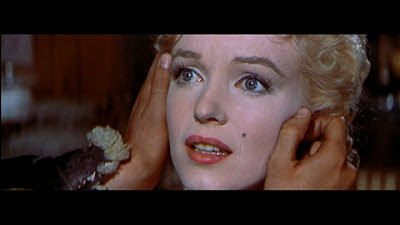 When Bo sees her singing, or at least her version of singing, he knows she’s the one for him, and at first, his brashness is attractive to Cherie. Bo has his first kiss with her; she is much more experienced, but it seems clear that experience wasn’t really voluntary in the past, or at least she didn’t really have any desire to be kissed except for perhaps one boy oh so long ago. 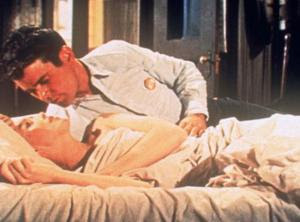 Well, Bo has decided, Cherie will be his wife (who he keeps calling “Cherry”), and she’ll move to his Montana ranch. But Cherie wants nothing of it. Unfortunately, she doesn’t know how to express it, at least not in a way Bo understands, even after Bo bursts into her apartment without permission the next morning, coerces her to watching the rodeo parade, and into watching him from the stands as he wins event after event. She is not impressed, and when she discovers that she shouldn’t have signed a marriage license with him because that means she is agreeing to get married, she runs across the rodeo stadium, right through the middle of one of Bo’s events, just to get away from him. 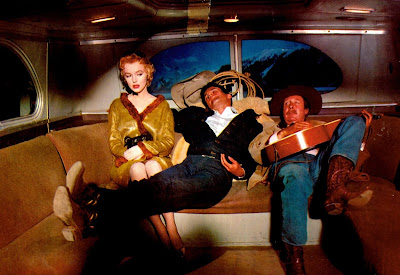 They then stop at the Bus Stop of the title, and we begin where the play starts. Only now, she really is convincingly kidnapped, and Virgil is pretty much on board with it, despite some weak protests. Cherie hopes that getting off at the stop and hiding while Bo is asleep on the bus will offer her an escape, but instead the bus is snowed in and they have to stay overnight. Bo discovers what Cherie is trying to do, and the bus driver discovers what Bo has done, and they get into a fight in which the driver thankfully bests Bo. For the record, Virgil does start the fight with one punch, then tags the bus driver in. Bo then concedes that’s he’s done the wrong thing, and eventually apologizes to everyone in the bus stop the next morning, including Cherie. 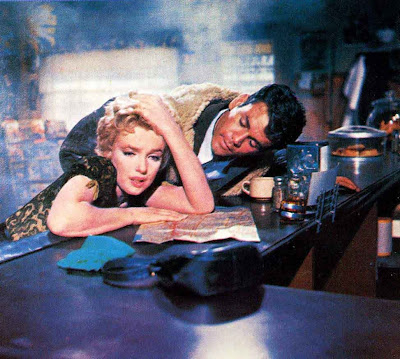 Now, supposedly, this apology is something that Cherie has always been looking for: respect. Therefore, her attraction to Bo plus his sincere apology wins her over, and she decides to marry him anyway. There’s even a moment where Virgil decides he’s not going back to Montana, and Bo is going to force him, but he listens to Cherie when she tells him you can’t force people to do what you want. We’re supposed to see that as Bo realizing that Cherie is going to be his wife and he has to listen to her, and that he’s learning a lesson.

But I don’t see it that way. Sure, the character of Bo is sincere when he apologizes, but he doesn’t really want to. It takes so much just to get him to do so, and he immediately forgets when Virgil decides to leave. He just doesn’t understand. Plus, Cherie was convinced that she didn’t want to go with this man, and yet changes her mind and gives up her dreams to go to Hollywood.

There’s an implied happy ending here, but instead, I visualize her going to the ranch, hating it, and wanting to leave, but Bo keeping her there. Why? Because although Bo apologizes, he never really learns the lesson of allowing people to do what they want. Sure, Virgil leaves, and Bo is broken up about it. But that’s different from wanting a woman to be your wife. Bo is still used to getting what he wants, and it isn’t a far leap to see him not wanting to lose Cherie, too. As long as she stays, things will be fine, but it’s just too fast and too easy. And without Virgil there to keep him in some kind of check (which he barely did before), who knows how far Bo is likely to go?

What’s more, this is another of these stories that suggest that as long as a woman is at least a little attracted to you, if you’re persistant, she’ll come around. Even if you kidnap her against her will.

Ok, there aren’t that many of those kinds of stories that include kidnapping. But stalking, certainly, and Bo does plenty of that, too.

Overall, then, while this story may ring of some kind of truth of real life, it certainly isn’t a feel good happy ending story.