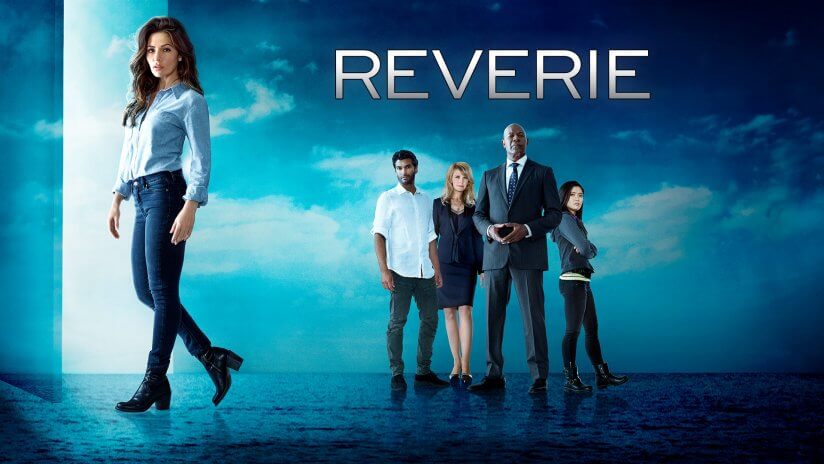 So, last episode, we learned a bit more about Mara’s past, and that Ray is still alive. We knew Mara is still healing, but we didn’t know about her ex…Chris. What are we in for this week? Let’s find out.

We begin with Paul and Mara playing around in one of the training areas. Paul has finally figured out how to fly in Reverie. He’s not exactly soaring–he floats a bit and falls on his face–but he’s having Mara remind him that Reverie isn’t real, so that he’s better able to suspend belief enough to manage flight. He manages that floating and faceplant.

The neat thing here is the obvious joy between Paul and Mara.

However, as Mara goes to leave, everything flickers and her reverie is hijacked. The mandala on the doorknob is black. Mara opens the door, and we see a dank hallway and hear someone screaming for help.

Mara finds a young man with an accent locked in a room in this dank abandoned warehouse, tied to a chair. He doesn’t seem aware he’s in a program, and he was kidnapped. He says a soldier has been interrogating him about an attack on an airbase, and when she gets him to say ‘Exitus’—it doesn’t work.

It doesn’t work for her, either.

The young man, Ehmet, is pretty untrusting, and panicking at this point. He doesn’t believe he;’s in a program. The program starts to glitch out around her, and Mara gets booted. Thank goodness for that, huh? It freaks Paul out something fierce.

Paul, Charlie, Lexie, and Mara get together to talk about it, and they talk about rare cases of crossed reveries, where people might accidentally might find themselves in someone else’s reverie. It seems Mara has randomly stumbled upon Ehmet, but somehow, this doesn’t feel like random coincidence.

They figure out that Ehmet is a Syrian refugee, and has been missing for a bit. Charlie twigs right away to the idea that trying to track the kid down might not be a real great idea. His instincts are proven right when they figure out that the BCI belongs to a government program that’s obviously trialing using Reverie for interrogations. Of course, they ask Monica.

“There won’t even be proof it happened.”

Alexis is super pissed when she finds out what the government has been doing with her program, and that there’s nothing she can do about it. Monica apparently didn’t want to use it this way, but it’s what they’re doing.

Chris gives a call to Mara, and wants to hook up later.

Lexie is totally down to help Mara and Paul in whatever they’re planning on doing to help Ehmet. Paul wants to make sure they’re in the right first, but as long as Ehmet is innocent he’s in too. Lexie hacks back in, and hooks Mara up with a mandala up to exit when she wants to. Mara finds that she can’t get back in though, and they figure out that the interrogator is back in…you can’t have more than two at a time in there.

Mara finds Ehmet’s brother. She gets more information from him and finds out that the two of them were in a refugee camp for a long time, and during their journey their boat sank.

Mara finally gets back in, and brings escape tools with her. If the both of them can get to the mandala, at least Ehmet will be able to wake up. At first, Ehmet is scared and runs from Mara. He still doesn’t believe her.

Back in the office, the army interrogator makes a visit to the office, and he says they’re locked out if Mara stays in the reverie. He also throws around phrases like ‘material support of terrorism’. Paul and Lexie basically tell the guy to bugger off, and Monica gets all huffy too.

Once the guy goes back, they’ll know where they’re keeping Ehmet.

Back in the reverie, Mara is still trying to convince Ehmet that she’s there to help. They talk, and eventually he calms down. They try to gt to the exit mandala that Alexis made, but the government goons have inserted armed avatars to guard it.

Back in the office, Charlie talks with Ehmet’s brother, and they figure out how to prove he and Ehmet were in the refugee camp, and not at a terrorist training camp in Turkey.

Back in the reverie, Ehmet and Mara try to separate the avatars to pick them off one at a time. While they plan, Mara finds out that Ehmet lost his father when the boat sank during the escape from Syria.

They manage to get rid of one avatar, but the warehouse starts to react against them, and the other avatar shoots Mara in the side.

Back in reality, the stress on Mara’s system is evident. They also figure out that a documentary journalist was at the camp, and that footage may exist with the boys on it.

Back in the reverie, Mara and Ehmet finally get rid of the last guard, and finally get to the exit mandala by reminding each other that ‘none of this is real’. However, when Mara gets out, she finds she has a huge bruise where she was shot in the reverie.

Charlie and Lexie track down the interrogator, and they show him the documentary footage with the boys in it. Monica also leans on the interrogator to let Ehmet go. She gets them to suspend the interrogation program as well. Charlie figures out that Monica put Mara onto the reverie to sabotage the program. Hmm…

Chris meets Mara back at her place. Ooh… She admits to him that she went to see Ray. She seems overall pretty chill about it. Her and Chris get it on.

So, it looks like maybe things are turning around for Mara?

JL Jamieson is a strange book nerd who writes technical documents by day, and book news, reviews, and other assorted opinions for you by night. She is working on her own fiction, and spends time making jewelry to sell at local conventions, as well as stalking the social media accounts of all your favorite writers.