It’s the Dynamite before Full Gear and we’re LIVE in Charlotte, a huge wrestling town…except when WWE is there. This looks like a very stacked TV card to build to the pay-per-view too.

Oh man, do I have to do another one of these Author Notes? Ugh, alright then. 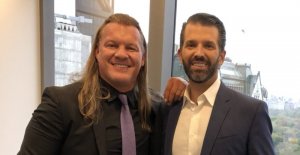 Come on, Champ. Do better.

(Author’s note: Even in light of a certain AEW Champion’s recent decision to fraternize with a certain offspring of a certain United States president, I assure you, my faithful readers, I will be entirely impartial in this recap. Except when I write about Trump Jr.’s new buddy. Seriously, that is just bonkers.)

This is a crowd WWE would die for right now. The Best Friends (or maybe just Orange Cassidy) are over huge in Charlotte tonight! PAC controls the match playing the rabid wolverine character very well. This match is reminding everyone of PAC’s x-factor as a muscular high flyer. Commentators mention his similarity to Dynamite Kid, while I notice his similarity to a Radical wrestler who will not be named. Trent never really gets going, but Orange Cassidy confronts PAC with his crowd-pleasing kicks. As he winds up for the big shot, Orange gets a PAC boot to the face. But the distraction allows Trent to get some offense.

Man, the crowd is loving this match! And I am too!

Tornado DDT from Trent and PAC sells like he’s dead, but it only gets two. He’s not dead yet.

PAC counters with a Brainbuster on the floor. Good GOD! PAC hits the black arrow in the ring, and someone must have missed a signal because the ref stops at 2 even through Trent never kicks out. Hopefully that was a botch, and not a result of the Brainbuster. PAC locks in the Brutalizer to get the win but that ending hurts the reaction from the crowd. The Bastard does his best to get the heat back with a promo on Adam Page to lead up to Full Gear, but the weird finish was a bit of a bummer there. 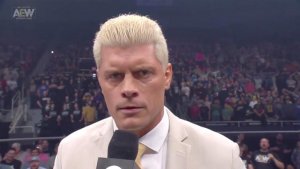 Cody delivers a hell of a PPV building promo.

Cody talks about building the company and refers to the history of the sport. A mention of his father gets a nice ovation. He calls AEW “Ellis Island for wrestlers.” I assume that means Trump Jr.’s pal thinks it should be shut down, eh?

Cody then announces a stip for the Full Gear match. If he doesn’t win, he will never challenge again. Then he delivers a sick burn about Jericho’s book, sharing that it’s just 3 dollars on Amazon (still too high a price, in my opinion). Cody proceeds to call him a stupid dick (cue quite appropriate chant).

He moves on to discuss the eventual meeting between The Elite and the Inner Circle, referring to it as a match beyond. Did Cody just implicitly say they will be doing Wargames? Ooh. That’s a fun idea to counter NXT’s Wargames with an AEW version. I’m here for that.

The Lucha Bros and SCU are introduced to observe the following match. SCU will be sitting with the TNT commentary team and the Luchas are with the Spanish team.

Marq Quen gets the early beating from Dark Order. A blind tag brings in Kassidy but the order gets the better of him as well. Quen eventually comes in with hot tag and cleans house. There are a lot of spots here to get the crowd going, and an impressive Gin and Juice wins it for Private Party.

The other teams hit the ring for a standoff. This could be a really great match on Saturday.

Jericho is profiled in a weird Behind the Music-type video. Virgil shows up, and an old lady curses. No interview with Trump Jr. though, so it’s just fake news. A week ago, I would have given this at least a chance, but no thanks, Champ.

We recap Santana and Ortiz attacking the Rock and Roll express and the Bucks last week, which leads into a recap of the top matches at Full Gear on Saturday. I’m getting closer and closer to paying for this show. How much does Jericho make from PPV buys?

Sakura dresses as Freddie Mercury, complete with mustache. That’s fun. I wonder if she will have some more entrance flair for Full Gear? Riho and Sakura start with a brief preview of the title match this weekend, and I continue to be intrigued. The faces dominate Sakura for a while until Hayter can get in and stop the momentum. Riho disappears at some point leaving Shanna to fight off the heels. Riho comes in to break up a three count and she nearly was too late. Gotta work on these sequences, folks. Sakura and Riho exchange near falls until Sakura is wraps up a Magistral Cradle for the victory.

Brandi’s evolution continues with a cosplay of Elvira, Mistress of the Night. It appears Kong is going to be the Brock Lesnar to her Paul Heyman. Interesting.

Last week Spears attacked Joey Janela with pliers at the behest of Tully Blanchard. I imagine that will manifest itself during this match in come way. Cutler misses a golden opportunity to counter Spears’ 10 taunt with a natural 20 taunt. Where my D&D crowd at?

Cutler puts up a bit of a fight but the aggression of spears is too much as a Death Valley Driver gets the three count. Spears tries to set up a chair for some violence but Janela runs in to save Cutler and continue the new feud.

A Moxley/Omega recap leads us to our Main Event!

Justin Roberts gets the crowd revved up for this one.

Let’s make this quick. PAC interferes. DJT Jr.’s friend gets the pin. Cody hits the ring and puts the hurt on the champ.

Moxley comes through the crowd to confront Omega. Santana and Ortiz attack them both, which brings out the Bucks. Jon and Kenny fight to the back as the Inner Circle and Elite go at it. Nick heads up to the top of the tunnel and sentons on top of the mass of humanity. DJT Jr.’s chum knocks down a cameraman who must have had an Elizabeth Warren button on his shirt or something. You know, if this turns into a massive heel stunt and Jericho isn’t really a MAGA guy, I might be okay with this. But for now. No.

Full Gear looks pretty great though. I don’t have time to explain the problem with charging $50 for pay-per-views after WWE has transformed the wrestling market, but I will have to wait for the inevitable cheap/free version to be available. To those of you who are willing to dole out the funds, I think you will really enjoy the show, and please look me up on Fiverr and hire me for writing jobs.