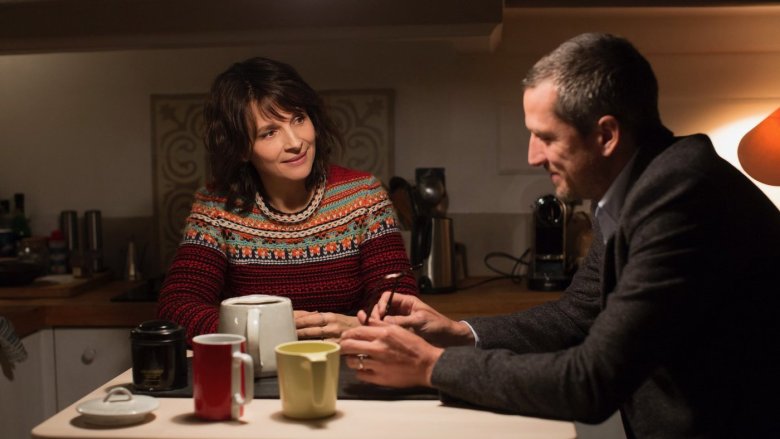 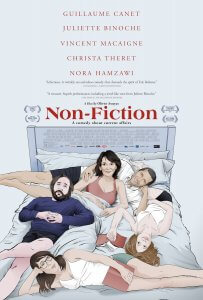 I joked to a colleague before watching Olivier Assayas’s new comedy of manners, Non-Fiction (aka Doubles vies, or Double Lives), that I could already foresee what my review would be: “it’s good and it’s French.” Well, now that I’ve seen the film, that pre-emptive take pretty much holds up. If you like good, French things, you should enjoy this film.

While not heavy on belly laughs, Non-Fiction has such a frantic, talky vibe that it’s hard not to get swept along happily by the idiosyncratic energy and banter of its characters. (Of course, at nearly two hours, sometimes the nonstop dialogue can get wearying, but these lulls are thankfully rare.)

Guillaume Canet, looking like France’s answer to McDreamy, is beleaguered book publisher Alain Danielson. Alain is married to aging actress Selena (Juliette Binoche), who is ambivalent about her current role on a belovedly bingeable cop show.

Both Alain and Selena are having affairs.

Alain is hooking up with Laure (Christa Théret), the young woman who has been hired to spearhead his esteemed publishing firm’s transition into the digital realm. Assayas’s films, such as Demonlover, have long made it clear that he is wary of technology’s impact on art and culture; Alain and Laure’s coupling is charged by their differing views on things like Google’s virtual library of 20,000+ books.

Selena, meanwhile, is in the midst of a long-term affair with sad sack author Léonard Spiegel (Vincent Macaigne), who specializes in “auto-fiction,” which is to say novels that would be memoirs if not for the addition of the thinnest possible patina of make-believe. Selena points out that most of these changes (e.g., Leonard saying he received a movie theater BJ during Michael Haneke’s critically acclaimed The White Ribbon instead of The Force Awakens) simply make his character seem better than he is. Selena’s husband, Alain, is bored with Léonard’s work, so he refuses to publish the newest novel. Selena goes to bat for the book; however, it’s unclear whether she really likes it, or she just likes the fact that she’s in it. 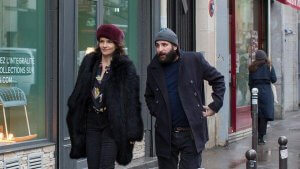 Léonard feels like an oddly appropriate character for this age of oversharing, although fittingly he is surprised when he finds out that he is consistently roasted by strangers online.

Nora Hamzawi plays Léonard’s wife, a political PR flack who initially seems too smart, too attractive, and too put-together to be in a marriage with a blabbermouth schlub like Léonard. Assayas’s script posits the notion that opposites attract, but Hamzawi is a good enough actor to make this implausible connection real. Whether discussing Léonard’s adultery or her essential happiness in their wedded commitment, the film’s most emotionally startling moments belong to her.

Assayas must be lauded for his restless visual approach. He and his cinematographer Yorick Le Saux consistently finds ways to maneuver the actors and camera around so that the script’s pages and pages of dialogue don’t feel bogged-down and static. However, it must be said that, even for this reviewer, who loves books and has spent plenty of time working around books, the endless hand-wringing from many characters over what e-books mean to the future of literacy and the decimation of the printed word often takes on a distinctive “old man yells at cloud” flavor.

To his credit, as concerned as Assayas clearly is, his final take on the subject appears to be more ambivalent and possibly hopeful. Maybe we live in a post-truth, post-books world. But then again, maybe we won’t forever.

Non-Fiction is currently playing in New York. It opens in Los Angeles on Friday, May 10 at the Arclight Hollywood and the Laemmle Royal. It platforms to more select cities in the following weeks.