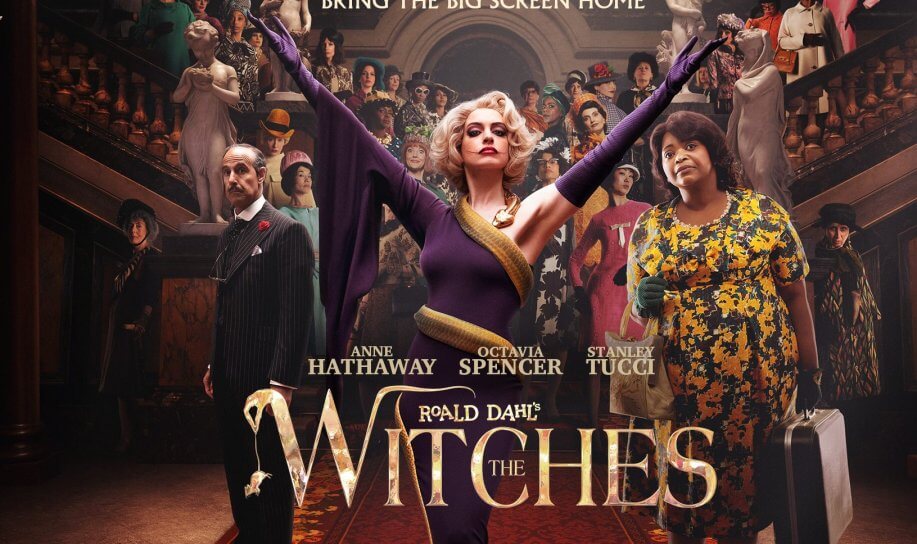 “The Witches” by Roald Dahl was adapted to the screen in 1990 and starred Angelica Huston. It was creepy and weird but achieved cult classic status in the past 30 years. In 2020, Robert Zemeckis directed a remake starring Anne Hathaway and Octavia Spencer that, thanks to the pandemic, was released directly to HBO Max. Even not in a pandemic, this would have been a straight-to-streaming release.

Hero Boy (yep, doesn’t even have a name and is played by Jahzir Bruno) loses his parents in a car accident and goes to live with his Grandma (Spencer) in Alabama. She is a healer and tells him the truth about witches, including a tale about her friend who was tricked by a witch and transformed into a chicken. When the boy crosses paths with a witch in the local general store, the witch curses Grandma with a mysterious illness. She packs them up and takes them to a posh hotel on the shore where she thinks they’ll be safe.

Unfortunately, a coven of witches has checked in for a phoney conference, led by the Grand High Witch (Hathaway). The boy sneaks into their hall to witness them remove their gloves and shoes, revealing claws hands and toeless, gnarled feet, and pull off their wigs to reveal bald, scabby heads. They also have huge, sharp-toothy grins and forked tongues (this was pretty creepy, honestly). The Grand High Witch’s plan is to turn all the children in the world into mice as children are despised by witches. Once the boy witnesses another boy in the hotel, Bruno Jenkins (Codie-Lei Eastick), transform into mouse, things quickly go off the rails and it’s up to the boy, Bruno, their new friend Mary, and Grandma to stop the witches before they turn all the children in the world into tiny mice!

Full transparency, I’ve only seen the original film one time. My wife loves to tell of her 10th birthday when she made all her friends at her sleepover watch “The Witches”, and everyone cried because it was so scary. And to be far, it’s super creepy. But it is the masks and practical effects that stir so much terror in viewers, as well as Angelica Huston’s amazingly over the top performance.

Hathaway is clearly having a really, really good time playing the GHW, but the lack of bulbous, warty noses fails to elevate the new interpretation of the titular sorceresses to the same level of terror as the original. They feel more like Pennywise from “It” than witches. The story is mostly the same, however set in Alabama rather than Norway. The CGI is fine, but the puppetry of the original was adorable and whimsical. The performances of supporting cast members such as Stanley Tucci and voice work from Kristen Chenowith and Chris Rock are…fine. But on the whole, the movie lacks heart.

It feels like a slightly updated carbon copy of the original with nothing notable brought to the table. It’s like someone took a recipe for a dish you’ve always loved, changed two things and served it in a different dish and hoped you’d be wowed by it. Really, you were hoping for the original dish and this feels like a waste of both your time eating it and their time making it.

And the pacing is so slow. So painfully slow. I would like to know when the memo went out to Hollywood that all movies need to be over two hours so I can travel back in time and stop that practice immediately. This isn’t a complicated story: witches want to change children into mice and squish them, a group of children and a grandmother stop them. The end. Why is this 106 minutes long?

What happened to Bob?

The most disappointing aspect of all of this is I’m really starting to think Zemeckis has lost his touch. I haven’t truly enjoyed one of his films since “Cast Away” (though I didn’t see “Welcome to Marwin” because I heard/read it wasn’t good). Has his reliance on CGI hindered him from being a great storyteller? Maybe. But whatever it is, I miss his films like “Back to the Future” and “Death Becomes Her”.

Is “Roald Dahl’s The Witches” a bad movie? No, of course not. It’s just not a very good one.

Rating: 2 out of 5 Snack Packs

Lincoln L. Hayes is an actor and writer in NYC. His show “SESSION ZERO” is now available in podcast format everywhere you get podcasts. New episodes will drop in February 2021.