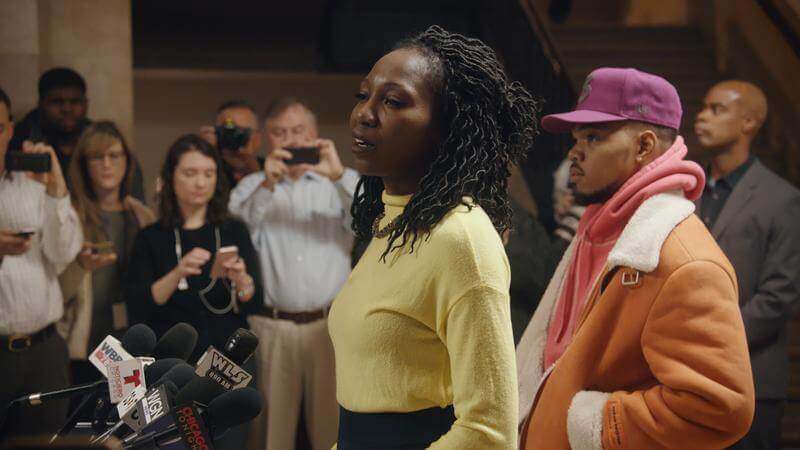 The five-part documentary series City So Real uses the 2019 Chicago mayoral election as the center of a kaleidoscopic portrait of the city. Director Steve James (Hoop Dreams, The Interrupters) follows a number of candidates through their campaigns, but also bounces around to different neighborhoods to show the kind of people these candidates will be representing. The film was originally screened at festivals in 4 hour-long parts earlier this year. For the television presentation, James and his team completed an 80-minute follow-up which includes post-election material on the 2020 pandemic and the post-George Floyd uprising. The full 5 1/2-hour series is airing complete without commercials tonight on Nat Geo. The five episodes will be available on Hulu starting Friday.

When the series begins, in the summer of 2018, there are roughly twenty hopefuls looking to run for mayor in Chicago. This is even before the incumbent Rahm Emanuel decides not to seek re-election in September. City So Real doesn’t follow all of the candidates, but we are given a fairly broad cross-section. The field runs from establishment candidates like Bill Daley (a kind of Jeb Bush of Chicago, whose father and brother were both the mayor collectively for decades) and former police superintendent Garry McCarthy, to idealistic upstarts like Ja’Mal Green and Neal Sáles-Griffin. Three women of color are front-runners at different times during the race: Toni Preckwinkle, who touts a progressive past but seems well-established in the city’s political machine; Amara Enyia, whose community-minded platform earns her hipster credibility and the endorsements of Chance the Rapper and Kanye West; and Lori Lightfoot, the only out LGBTQ candidate.

James illuminates a little bit of Chicago’s notoriously convoluted and insider-geared political system. One major threshold that all candidates need to cross to appear on the ballot is the collection of 12,500 valid voter signatures on a petition (far more than most major cities). But that is just step one. Once the signatures are collected, the candidates target their biggest threats by contesting the validity of opponents’ signatures to keep them off the ballot. The team behind black entrepreneur Willie Wilson strategically attack Ja’Mal Green and Neal Sáles-Griffin. Green doesn’t want to play the game, can’t withstand the assault, and withdraws from the race. But Sáles-Griffin shows a willingness to cooperate, which wins over the Willie Wilson camp. Late into the process, the Wilson team rescinds their challenge to Sáles-Griffin’s petition — much to the wide-eyed disbelief of the overworked election officials.

Amara Enyia and Chance the Rapper in City So Real

Even apart from the relevance to the current national election, City So Real eloquently demonstrates how Chicago is a mircocosm of this moment in the United States.

Chicago has a diversity of cultures — that mostly remain within their own neighborhoods. The old Italian-American guys whom we see hang out in their local barbershop sure aren’t going to the South Side to grab dinner at Daley’s, a noted “home for gossip” where we see bespectacled white candidate Paul Vallas trying to garner black supporters. Post-pandemic, the owner of a Chinatown restaurant describes being insulted and besieged by prank calls, asking if they serve “bat soup” with “a side of corona.”

Before the killing of George Floyd triggered a nationwide series of protests, Chicago waits with bated breath over the trial of Jason Van Dyke. Van Dyke shot 17-year-old Laquan McDonald sixteen times as the teenager was walking away from him. Protesters march in the streets while worn-out white and black on-lookers both dread an impending riot.

City hall meetings are swarmed with protestors, looking to contest the building of new police academy facilities and a neighborhood-demolishing real estate development. James lets his subjects speak for themselves, and never directly editorializes, but it’s not hard to see that the city is facilitating the rich get richer while leaving the working class and poor to fend for themselves.

Various interview subjects frequently state that people are fleeing Chicago due to crime and instability, but James offers plenty of vignettes to illustrate why people stay too. A Chicago Bears game brings people out to drink and party in neighborhoods throughout the city. Holidays inspires people to celebrate in the streets, and Valentine’s Day brings couples from all walks of life to City Hall to get married.

Unlike some recent documentary series which seem like unnecessarily padded-out feature films, City So Real easily justifies its length. As the series goes on, it adds more colorful texture and nuance to its portrait. In the end, it’s a rich tapestry that shows us the flaws of this city (and this country) without neglecting the beauty of its citizens.

*Dick Johnson Is Dead takes a poignant and darkly funny look at grief
*It’s been… 20 years since Barenaked Ladies released Maroon
*The Booksellers is a charming doc about print culture
*Recorder: The Marion Stokes Project profiles a VHS idealist

Justin RemerReview: “City So Real” is a rich, kaleidoscopic portrait of Chicago10.29.2020