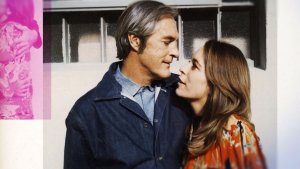 The new documentary from groundbreaking filmmaker Errol Morris (The B-Side, The Fog of War), My Psychedelic Love Story, premieres Sunday night on Showtime. It profiles Joanna Harcourt-Smith, who was in a relationship with counterculture legend Timothy Leary in the 1970s. With a consistent smile and heavy Swiss-German accent, Harcourt-Smith recounts her scattered adventures with the famous acid guru, including his imprisonment and eventual cooperation with the federal authorities.

The film is framed by the accusation that Joanna was a kind of Mata Hari, who was programmed by the CIA to get Leary captured and then force him to turn snitch. Harcourt-Smith contacts Morris, because of his Netflix series on the MK Ultra program, Wormwood. She wants to know if she was somehow manipulated by the U.S. government to do these things of which she was accused.

Rather than explore these potential conspiracies, Morris has Joanna recount her romance, as she did in the 2013 memoir, Tripping the Bardo with Timothy Leary. Beginning from a privileged youth, full of various traumas, Joanna became a kind of wayward heiress, flitting through the orbit of folks like Diane von Fürstenberg, The Rolling Stones, and Brigitte Bardot. When she met Timothy Leary, she only knew of him as a reference in The Moody Blues song, “Legend of a Mind.” At the time, he was a fugitive from justice, seeking asylum in Switzerland, and his outlaw status made him immediately appealing. They were together two months before they were captured by U.S. government agents in Afghanistan. 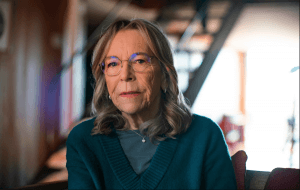 Morris compliments Joanna’s story with brightly colored visuals that evoke psychedelic posters of the ’60s or which ape the drawings on sheets of blotter acid. The poppiness of the style, coupled with the couple-on-the-run antics of Leary and Harcourt-Smith, make this feel closer to Morris’s 2010 documentary Tabloid than to his generally more ruminative work.

This approach gives the film a sense of momentum, but it also makes it hard to lock in on the narrative. Joanna offers plenty of interesting — and sometimes quite intense — anecdotes, but they are presented in a way that skips forward and backward in time. Coupled with the antic visual style, it’s easy to get confused about the relevance of names and places and events. Morris thankfully doesn’t gild the lily when it comes to the most intensely emotional moments in the film, but the style oddly suggests a filmmaker pandering to an audience not used to watching an interview-heavy Errol Morris film.

Joanna Harcourt-Smith died just last month, at the age of 74. Imperfect though it is, My Psychedelic Love Story is a fascinating final statement.

*Belushi seeks to find the man behind the comedy
*City So Real is a rich, kaleidoscopic portrait of Chicago
*Dick Johnson Is Dead is a poignant and darkly funny look at grief
*The Booksellers is charming doc about print culture